Camera Basics for genealogists -- how much should I pay for a camera?

I believe that a camera is an essential tool for genealogists. With the advent of digital cameras, they have become even more valuable and necessary. I use my cameras for note taking (taking pictures of pages rather than copying anything out by hand or making photocopies), archiving (taking pictures of documents), preserving memories (pictures of reunions, cemeteries, family homes) and many other uses. But you may have wondered what a good camera may cost? 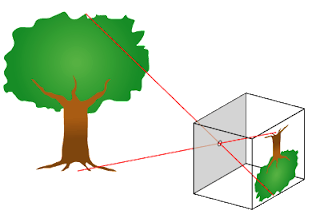 So if you go to a store and purchase a camera, what are you paying for? Here is a list of the parts:

1. The lens -- usually glass or some other substance (sometimes plastic).
2. A mechanism for focusing the light.
3. A way of opening and closing the light tight box, usually some kind of shutter mechanism.
4. A light sensitive surface that captures the image coming through the lens and stores it either chemically (film) or electronically (digital).

Most cameras also have some way of viewing the image before the picture is taken.

When I started taking pictures back in the 1950s, I had a truly horrible camera. Here is a really bad picture to illustrate the problem: 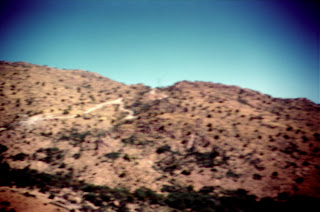 Not all of the problems with this picture were due to my inexperience. You will notice the dark corners of the picture. This is called vignetting and is caused by a really poor camera lens. You may also notice that the camera was out of focus. This is caused by camera movement during the time it takes the picture or maybe the lens was just not focused. All of these problems are of much less importance with today's mostly automatic cameras. (It is probably fortunate for the world that I did not have a digital camera when I was young or we would have another 10,000 or so photos to deal with).

Let's get down to business. What do you intend to use the camera for? Are you hoping for poster sized art-quality prints to sell in galleries or to high-end magazines? Or are you looking more for a few photos of your family and to reproduce some documents? Do you intend to carry the camera with you on trips to do research? Or are you going to keep it in a drawer and only bring it out on special occasions? Or are you going to carry it with you all of the time, just in case? All of these factors will determine the type of camera you purchase and hence, its purchase price.

It is important to understand that cameras and lenses have a huge price spread. The least expensive digital camera today costs about $40 new. The most expensive cameras cost well in excess of $30,000. That is a phenomenal price spread. If cars had the same price spread the most expensive cars would cost over $11,000,000. (I realize there are cars that cost that much as collectors' items but most consumer items do not have such an extreme price variation). So why not just go out and buy the $40 camera and be done with it? Hmm. Not a bad idea, except you might not be too happy with the results.

Let's look at each price level and see why you might want to spend more.

Cheap cameras
I define cheap cameras as those costing less than $100. The materials are mostly all plastic, the lenses are inexpensively made and the mechanisms inside the camera are not particularly reliable. Usually, if the camera is an older model it has stayed in stock because no one wanted purchase it. These cameras fall into the point-and-shoot variety. The photographer has very little control over the end product, i.e. the picture. You can probably guess that I do not recommend any cheap cameras.

Inexpensive cameras
Defined by me as cameras costing up to $300. Between $100 and $300, there is a huge selection of very good cameras for the person who does not consider themselves to be a photographer and wants a camera that is easy to use and gives good quality pictures. You will notice that I don't mention Megapixels. That is because almost every digital camera available today (except the cheap ones) has a sensor that captures between 10 and 15 Megapixels. Although these cameras are also point-and-shoot, that is, mostly automated in their function, they do an adequate job of taking pictures. Here is the caution, as I have said before in other posts, stay with mainstream. Purchase a camera from a camera company. If it were me, I would stick with Canon or Nikon, but there are good cameras from other manufacturers. There are exceptions, for example, Panasonic (not a camera manufacturer historically) teamed up with Leica (a manufacturer of high end cameras) to make a very good camera. I had a Panasonic Lumix that I gave to my son who still uses it. It was and is a really good camera.

Mid-range cameras
If you decide to pay more than $300, you move into a different type of camera. Although they are still mostly the point-and-shoot variety, they have a lot more features and begin to be more complicated. You may have to read the manual that comes with the camera just to understand all of the things the camera can do. The same advice applies to the brands and types, stay with the most popular models and the most reliable brands. At the higher end, these cameras begin to have interchangeable lenses. That means that the lens and camera are purchased separately (or at least can be, since most come in a kit). The lenses you get with the camera are called "kit lenses" and can be good quality, but are mostly a lot more cheaply made than good camera lenses.

High end
Cameras costing over $1000 are my idea of the high end. Usually that price is just for camera body without any lenses. If you are in this category, I hope you know what you are doing. I see a lot of people with cameras as I travel around the country. I see a lot of really expensive cameras being used by people who don't really know which end of the camera takes the picture. Don't buy an expensive camera just to impress your friends and relatives, save that for TVs and cars, as I said above an expensive camera does not make a good photographer.

Practical considerations
As the price of the cameras and lenses increases, almost invariably the weight increases. My camera and lenses take up an entire backpack. Maybe you don't visualize yourself lugging fifteen pounds of cameras, lenses and a tripod everywhere you go. It might be more practical to carry a pocket-sized point-and-shoot camera. Think through how you might use the camera and where you might have to carry it.

This series will continue with more advice on cameras for research.
Posted by James Tanner at 8:43 AM