Return to Primary, Secondary or what?

As usual, a perceptive comment by Randy Seaver points out the fact that I didn't carry my argument in my recent post called Primary, Secondary or what?  His comment is well taken and says,


The definitions embodied in the Genealogical Proof Standard are pretty definitive and should be considered in your discussion above. The GPS discusses analyzing and drawing conclusions from all of the evidence found to support an assertion. See http://www.bcgcertification.org/resources/standard.html

In the GPS, Sources are either Original or Derivative.

Information is either Primary or Secondary.

Evidence is either Direct or Indirect.

These definitions make a lot of sense to me, and have been adopted by almost all of the professional community. You will hear them used almost exclusively at conferences.

The last part of the comment is not persuasive to me at all. Even if I didn't buy into the culture, I was still raised in the 60s to doubt all authority. Because a definition is repeated makes it suspect not authority. It is probably a good idea to revisit the Genealogical Proof Standard (Unfortunately the acronym is "GPS" which is not a good idea since GPS is so commonly associated with Global Positioning System). As set forth on the website for the Board for Certification of Genealogists, (BCG) the Genealogical Proof Standard consists of five elements:
My previous point was that tagging documents as "primary" or "secondary" leads most researchers to rely on the tag rather than the evidence. The first element "a reasonably exhaustive search" has the note that it "Assumes examination of a wide range of high quality sources" and "Minimizes the probability that undiscovered evidence will overturn a too-hasty conclusion." Randy is probably also referring to the Guidelines for Evaluating Genealogical Resources on the BCG site. A summary of the Guidelines is as follows:
The confusion arises, not with the analysis, but with the definitions. When researchers talk about a "source" are they referring to a particular document or one entry on the document? From the Guidelines discussion, it is clear that they are defining a source as a physical document. The definition is "A source is original if it is the ﬁrst written statement, photograph, or recording of an event." There is specific admonition to "get as close to the original as possible." The point I make is that just because a document is an "original" does not mean it is accurate at all. Later copies may contain the correct information missing or wrongly recorded in the so-called original. It is only by examining a document in its totality as part of the larger body of evidence that anyone can accurately judge the reliability of a document for any particular item.

The Guide defines primary information as, "A piece of information is primary when it is recorded by a knowledgeable eyewitness or participant in that event, or by an ofﬁcial whose duties require him or her to make an accurate record of the event when it occurs." It goes on to give the following definition of secondary information, "Secondary information is supplied by someone who was not at the event and may include errors caused by memory loss or inﬂuenced by other parties who may have a bias or be under emotional stress." I prefer the legal method of determining the reliability of a witness. There is usually no way to evaluate the reliability of the creator of a historic document, he or she may have been accurate or drunk. Can you tell by looking at a death certificate, for example, the mental state of the person who compiled the information? Do you really think that the doctor or coroner entered all of the information into the certificate form? 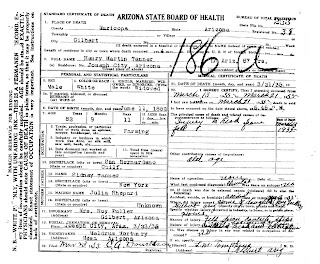 Look at this Death Certificate. Is this an original or derivative source? How do you know? Is the part written by hand primary or secondary? How do you know? What was the cause of Henry Tanner's death? Do you put any weight on the point that Henry fell on March 13 and didn't die until March 21st?

My point is this, regardless of the tag you put on the document, the information is inconclusive unless it is corroborated by similar information. One reason why researchers come to wrong conclusions or no conclusion is that very few researchers are even aware of the Genealogical Proof Standard or the Guidelines of BCG. As the Guide states concerning the evaluation process,


In order to reach reasonable conclusions, it is essential to perform a complete analysis of each resource. The process includes careful scrutiny of each fact (stated directly or implied) to determine plausibility, possible contradictory evidence, and impact on the particular research project.
At the same time, it is important to remember that a single genealogical resource is analogous to a single man—neither is an island, and neither stands alone. Every effort must be made to identify additional resources and connections to the particular project.

The fact that the above Death Certificate could be termed an "original" document or a "primary source" is meaningless if the handwritten information was added after the date of the typewritten information, which may have been compiled at an uncertain time after the incident in question. Talking about the GPS and Guidelines is only helpful if the researcher is aware that they exist and is not making his or her conclusions based on what they may have heard at a genealogical conference.

Here is a common definition of a "primary source." "A record that was created at the time of a event by a person who had reasonably close knowledge of the event." See About.com. Do you see any difference between this commonly used definition and the one prescribed by the BCG? My point is that the use of these facile definitions often obscures the very analysis they are supposed to promote. In case you didn't catch the difference, BCG uses the terms primary and secondary to refer to individual pieces of information, whereas the common definition encompasses the entire record. My argument is not with BCG but with the common use of the terms.

If you are a genealogical researcher and have never thought about these distinctions, you are not part of the solution. If you are presented with a document, like the Death Certificate above, and do not question the fact that it is partly handwritten and partly typed, then you need to read and think about the Guidelines on the BCG site.
Posted by James Tanner at 6:05 PM