File Sharing? GEDCOM or what?

It seems like whomever you need to share information with never seems to have the same program you use. There was a time when Personal Ancestral File (PAF) was pervasive. But with the de-emphasis on the program, there are dozens of different options. Your first door of opportunity in sharing files is to see what formats are supported by your own program. If you still use PAF your choices are really limited, you can import a GEDCOM or another PAF file. If you are exporting a file, you have a few more choices. Here is the Export Screen from PAF 5.2.18, the latest version: 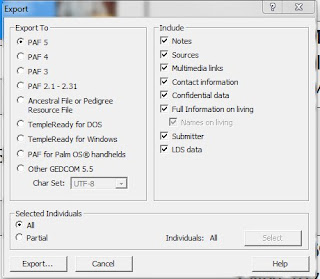 From a developers standpoint, there is almost no incentive to support your competitor's file format. Why would you want to make it easy for someone to switch programs? In genealogy, the issue of file sharing arises because of the need to share the information without re-entering massive amounts of data.

If you use a program like RootsMagic 4, you have a few more options for importing a file. Here is the Import screen from the latest version of RootsMagic: 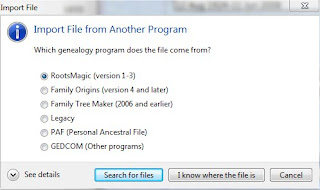 Again, if your particular program is not listed, you option is to create a GEDCOM file and import the information in that manner. Your options for export are limited to GEDCOM only. Even though Family Tree Maker is specified as supported, the import will only work with versions 2006 and earlier and the current version is 2011.

Legacy Family Tree will import from another Legacy file or from PAF directly, all other program files would have to be exported to a GEDCOM file. Your choice for export are also limited to Legacy, PAF or a GEDCOM.

In the Linux tech community there is some discussion and use of the open source program, Gramps, This free program is limited in its use in both Windows environments and on Mac OS X. However, I note that Gramps supports both import and export of GEDCOM files.

I could go on and on, but the point is this. There are few options for sharing files directly between different genealogy programs. Family Tree Maker for the PC and RootsMagic seem to have the most options, but all of the programs support a GEDCOM import. That may seem like good news until you realize that if you use GEDCOM to transfer data between genealogy programs you will very likely lose data in the process, even if you are transferring between the same programs i.e. from PAF to PAF.

Here is the bad news. There is presently no solution which is the best reason for the project to build a better GEDCOM and improve the chances of transferring information. If you would like more information please see BetterGedcom.

If you would like to get an idea of the complexity of file sharing options and have a word processing program like Microsoft Word or OpenOffice, when you go to save a file, check out the different possible formats for saving. Presently, there does not appear to be any major movement in the computer world to solve the file compatibility issues.
Posted by James Tanner at 7:21 AM