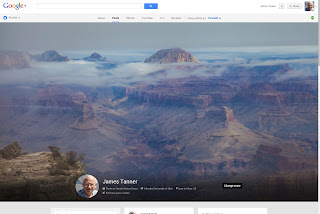 Google+ had some significant changes in the last day or so. The changes were announced at the keynote address at the Google I/O 2013 conference. The main visual change is that the display on Google+ adapts to single, double or triple columns depending on the size of the display. Google+ also adds hashtags to create ranked searches from the whole database of posts. Google is also adding hashtags by image recognition even if the post does not mention the subject of a photo. Google also released an entirely new Google Hangout application. Conversations on Hangouts are preserved so that the conversation can last for an extended period of time, even years.

I am sure that there will be some extensive discussion about the new additions to Google+ but it looks like there may be a whole set of tools that could be used if we all had time away from Facebook and Pinterest.

I noticed that the three column mode only showed up when I enlarged the window past a certain point on my large display. There are some extensive additions to the way photos are displayed and handled, hence the relationship to Pinterest. Some of the changes have been implemented previously but are now fully available, such as the huge photos that can be put on your profile page (see screenshot above).

What I see is an integration of the reader concept into Google+, trying to make the streams consolidated so you aren't going to more than one place to view content. But it is not yet, and may never be, a replacement for a reader or aggregator.