Can I do genealogy on my tablet? My smartphone? My watch?

Google glasses have started to be sold generally. Google held a one day sale to the public and it is supposed that thousands of the new products were sold online for $1,500. See CNN "Google Glass signals a wearables revolution." I would guess that most genealogists are either entirely uninterested in this new product or are wondering how in the world it might be of use. You might be more interested in these predictions from Forbes in a recent article entitled, "IDC: 87% Of Connected Devices Sales By 2017 Will Be Tablets And Smartphones." The article quotes IDC Technologies as stating:

Over the past couple of years, I have been watching tablets, including of course iPads, from being something people noticed and that were a novelty, to seeing parents hand their babies an iPad and watching the baby (less than a year old) play with the screen and make it work. Now that we are going to live only a few blocks from the Brigham University Campus, we see a lot more younger people as we drive to stores and such during the day. My wife and I were remarking that almost half of the students walking around had a cell phone of some kind glued to their ear. It was not unusual to see three or four young people walking together, all talking on separate cell phones and probably not to each other.

It is interesting that a search in the Apple App Store on the term "genealogy" brought up only the following from a screen shot:

There are actually quite a few more apps available, but apparently, the developers haven't figured out how to get their products to show up when someone searches for genealogy. A search for "family history" in the App Store gives only two of the above programs. For example, I know that Ancestry.com has an app for iOS (Apple) and it does not show up in a search in the App store.

However, in the iTunes App Store, there are over 100 apps for iPhone and only slightly less for the iPad. Here is a screen shot of the first few offerings: 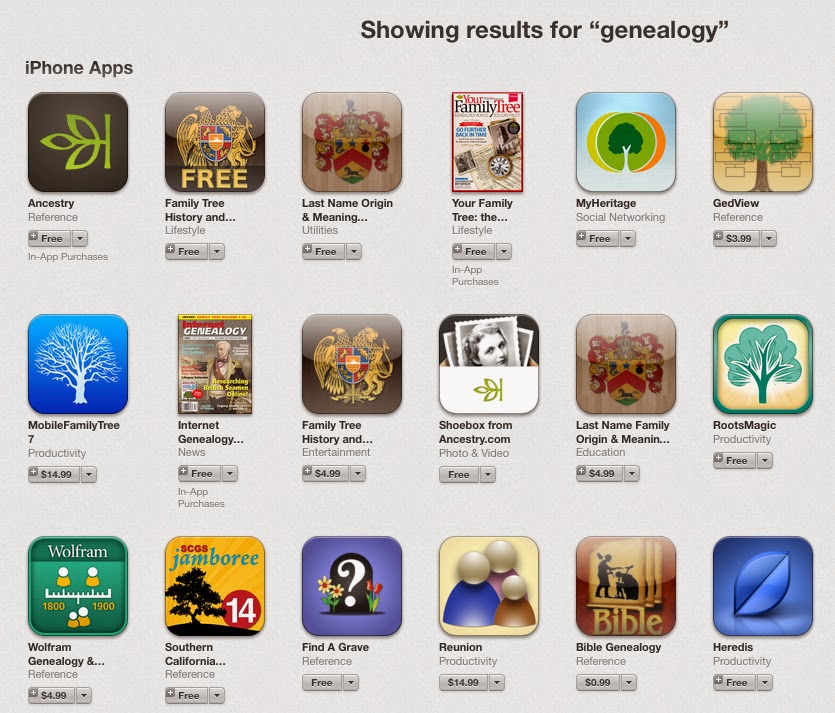 Many of these apps connect and synchronize with desktop computer programs such as the ones shown for RootsMagic, Reunion and Heredis. Some also allow direct entry into an online family tree, such as the one from Ancestry.com.

There are similar offerings from the Android Market: 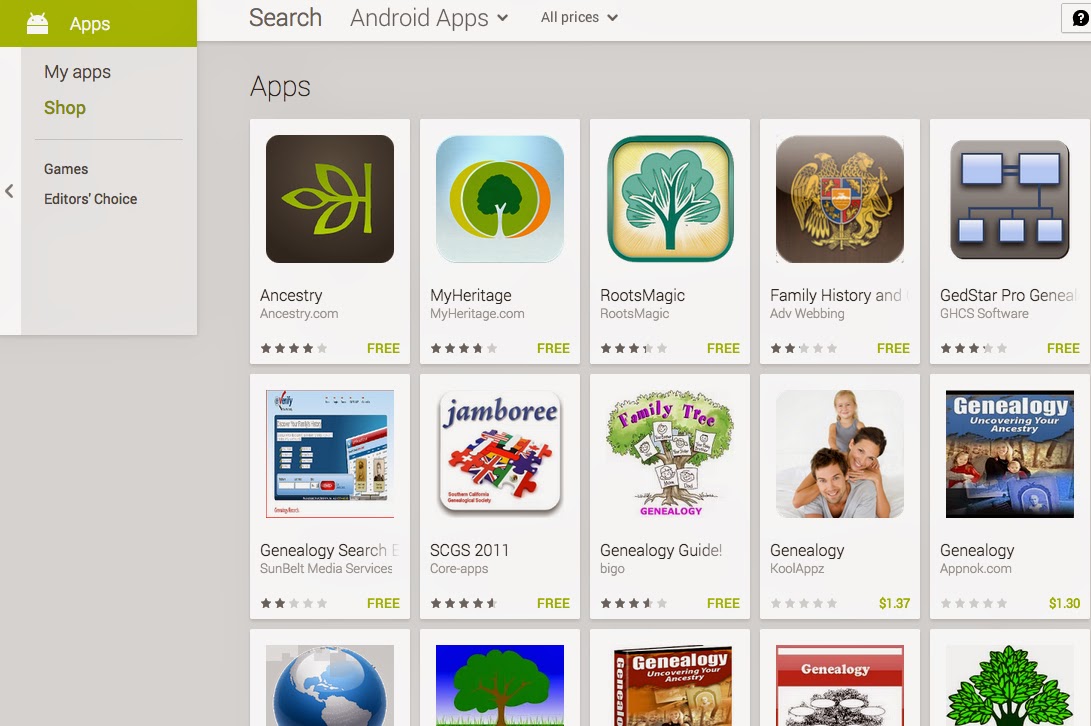 I guess the real question is whether or not you can do your genealogy entirely on one or more or these devices? I think that the main limitation is data entry. I cannot yet imagine doing a lot of data entry, especially into various data fields in a genealogy program without using some sort of keyboard. Now, granted, when I was thinking about upgrading my iPad, I seriously considered it as substitute for my laptop, but the functionality, even with the addition of a keyboard, was not yet there. But I do suggest that it will be possible very shortly, to function entirely with a keyboard and a tablet computer. I say this as I am working, and have been working almost steadily for the past few weeks, on my laptop. All my travels and moving from Arizona to Utah has made it necessary to work off of the laptop almost exclusively. Since I can now plug my laptop into a large screen, I may have to consider whether or not I even want to have a desktop computer. I am also using a touch pad now exclusively. I finally have given up using my mouse at all.

So, back to the question of the title. The answer is a qualified yes. It really depends on the development of the programs and your degree of involvement with technology and with genealogy. Can I run a full-blown genealogy program on my iPad? Not quite yet. Attaching peripherals such as a scanner can be really tricky. But I see this all moving in that direction in the not too distant future. For example, not too long ago, FamilySearch issued an Indexing app for smartphones and tablets. It did not work very well and was retired. Now, they are back again. The new version of Indexing coming shortly will support Indexing from a tablet. See New Indexing Program: Tablet Support and the New Learning Experience by Janell Vasquez.

If you don't have a tablet computer Android or iOS yet, you will have no idea what you are missing. You cannot imagine how integrated smartphones and tablets (iPads) can become in what you do every day including genealogically related activities.
Posted by James Tanner at 6:41 AM