The Good and the Bad of Names, Dates and Places -- Part One Names

Yesterday I listened to my daughter tell me a long explanation about trying to merge two duplicate individuals in FamilySearch.org Family Tree. One of the problems she encountered was that a female ancestor had been entered into the program with her married name rather than her maiden name. I have mentioned this issue previously but thought it would be appropriate to review again.

When I first started going through Family Group Records (FGR) 32 years ago inherited from my family, I quickly saw the variations in ways names, dates and places were recorded. Unfortunately, over the years those same problems crop up continually as I review my own and others' entries. Some of the reasons they occur reflect changes in the way entries were accepted at the time. Other issues are just incomplete or sloppy research. Let's take the name "Jane Alice Doe" as an example. Jane Doe marries Alan Edward Roe. Here are some of types of variations you could easily see from review a few hundred FGR over the years for exactly the same person :


and so forth. In addition, do you put the Last Name (Surname) first or do you put the name in capital letters or what? Now some of these issues are inherited from the way standard FGR forms were printed. For example, here is a common form that I would encounter: 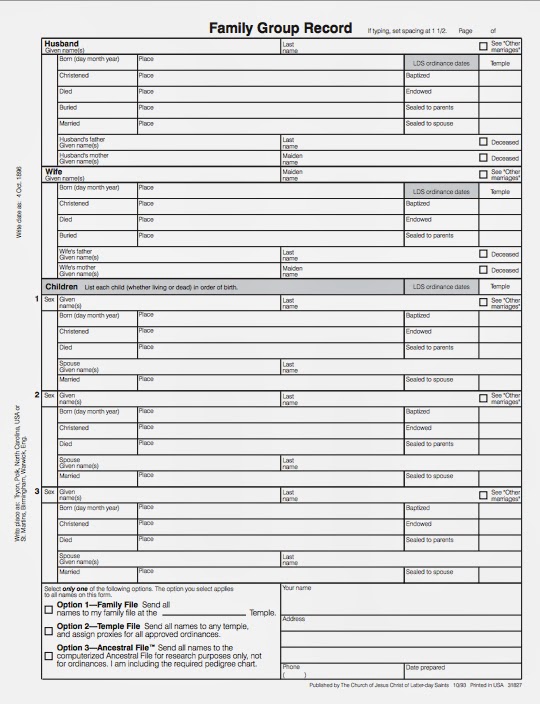 You can see dozens of variations of this form by searching online for "family group record form" or something like that. This particular sheet shows the wife's name to be entered in two parts, Given Name and Maiden Name. Here is a sample of different forms from the first part of a Google Image search for a FGR:

Here is one that I commonly found 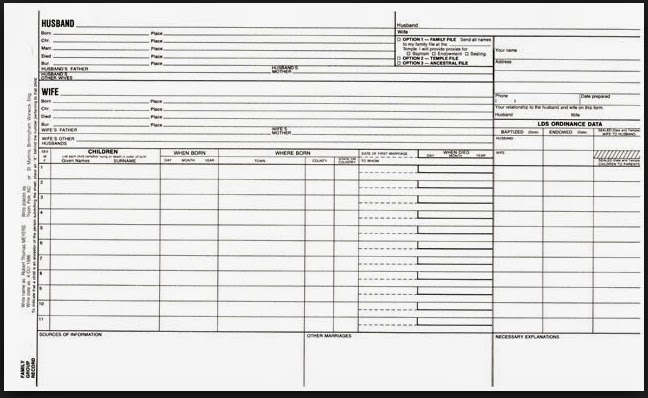 Here, the name for both the husband and the wife are simply a line without any designation as to the order of the names or whether to use any particular variation of the possible naming patterns. Earlier sheets usually limited the amount of space given in the form for any individual entry. This became a really important issue with place names, but this is a series and right now I am talking about names of people.

Using FamilySearch (and its predecessors) as an example, if you go back in history, you will see that the standard changed from time to time and from place to place. Early on, say about 1900 to 1920, there did not seem to be any standardized method of recording names. Eventually, there were guidelines such as using maiden name for females but if the maiden name was unknown, then use the prefix "Mrs." with the husband's surname. For a while, with typewritten FGRs, there was a standard that all surnames be capitalized. The immediate problem with this was the issue with names such as McDonald and MCDONALD.

I could probably go on for an entire book outlining the history of all these changes but let's fast forward to today. Do we have any standard way of entering name information? Well, actually we don't. We have a lot of different genealogical database programs, we have a huge number of online programs and very, very few of them give the user a clue as to how to enter names. If they do, the instructions are likely buried in some manual that never gets read. So when we go to an online family tree such as Ancestry.com we still see all of the variations, faithfully preserved, from the old FGRs.

It has been pointed out recently in comments to this and other blogs, that we do not have any "Genealogy Police" enforcing standards. But here are a few suggestions. Of course, I expect that there will be disagreements. Oh, before doing this let me mention that computers, rather than solving these issues, merely added another layer of variations. Most genealogists who were accustomed to entering their information in a particular way, simply used the computer to duplicate what they had be doing all along, even though it made no sense. Some of the genealogical database programs let you record surnames in all capitals or with upper and lower case and make the changes from one to another automatically. Why? I can see the reason for the editing changes but WHY ENCOURAGE PEOPLE TO PUT SURNAMES IN ALL CAPS? You might get my point.

One more observation, early computer programs were as bad as paper forms in limited the way names, dates and place due to character limitations built into the programs. Oh well.

Here are some general rules I suggest.


After all that discussion, that's it. If you think about it, most or nearly all of the problems I encountered over the years could be solved with these simple rules.