What's So Vital about Vital Records? 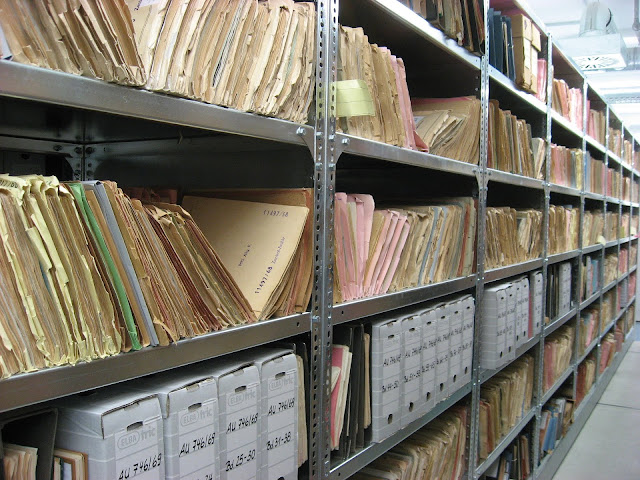 Many genealogists apparently think that vital records are both the beginning and the end of genealogical research. In looking through the documentation for online family trees, I estimate that the vast majority of the records that are documented have only references to, at most, census, birth, marriage, and death (including burial records). That's it. Hmm. Are we finished now?

In the larger online genealogy programs with record hints, the types of records included, assuming the record hints have been added as sources, begins to look a little more complete. The issue here is that documenting a person's life is a challenge and the basic vital records are those that are most easily identified and accessed. In some areas and depending on the time period, for example, where the Catholic Church or another denomination has been dominant, the parish records of christenings, confirmations, marriages, deaths/burials may be the only practical way to identify individuals and families.

One interesting issue is the common reporting of specific birth and/or death information long before such records were available. Here is an example. 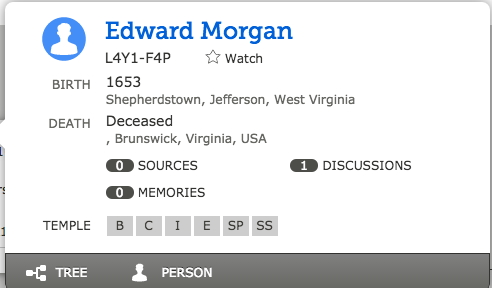 This entry for Edward Morgan appears to be legitimate. It has a birth date and a specific place. Here is the entry for the family showing a wife and a son. 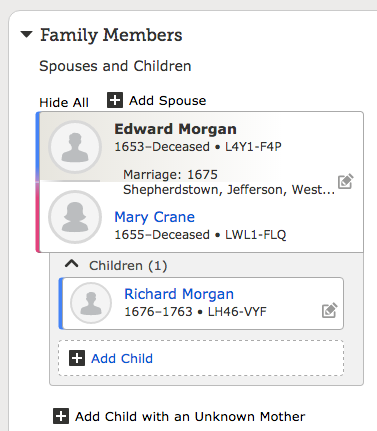 I might add that his "wife," Mary Crane, is also reported to have been born in Shepherdstown, Jefferson, West Virginia. Now, I mentioned that these dates are recorded as occurring long before they were available. Here are some pertinent historical events.

These entries come from the FamilySearch.org Family Tree and need I mention that they have no sources substantiating the dates or the places? The obvious question is where did this information come from?

In our rush to make sure everyone in our family tree has a name, a birth and a death date and a place, why don't we just make them all up and forget about doing any research or finding any supporting documentation? The interesting part of this particular line in the Family Tree is that all of the Morgan descendants from Edward Morgan beginning in time with a John Morgan born in 1734 are reported to have been born in Shepherdstown, West Virginia and needless to point out, all of these supposed dates and places are wrong.

If we think of the idea of records being created, we understand that the most relevant, genealogically important records are created at or near the time of an event by someone who had an interest in the event or a duty to report the event. The places where these important records are created are referred to as jurisdictions. In genealogy, a jurisdiction is a particular geographic area containing a defined legal authority. So, in order to find a birth record, for example, we need to determine if there was some entity or individual who might have had either an interest in or duty to record the birth.

In most of the United States, governmental interest in recording birth information did not become common until the end of the 19th Century or beginning of the 20th Century. A birth date, even one with just the year of birth, for someone such as Edward Morgan (above) in 1653 is highly suspect without some specific supporting explanation about where and how the date was recorded. I might mention that there is an Edward Morgan who immigrated to Virginia in 1653 but his father, John Morgan, as shown in the Family Tree, is recorded as the immigrant and born in Wales. (See QUISENBERRY, A. C. 1913. "THE FIRST PIONEER FAMILIES OF VIRGINIA". Register of Kentucky State Historical Society. 11 (32): 55-77). This book has the list of the first landowners or those who were sponsored or transported to Virginia and none of the Morgans listed are named John and none of them come from Wales. Interesting.

The challenge here is not just "finding a birth date" for a specific individual, but is in locating a record that can show that such an individual actually existed at the time and place indicated. With the above individuals, it would be nice if we knew they existed before we made up birth and death dates.
Posted by James Tanner at 2:16 PM