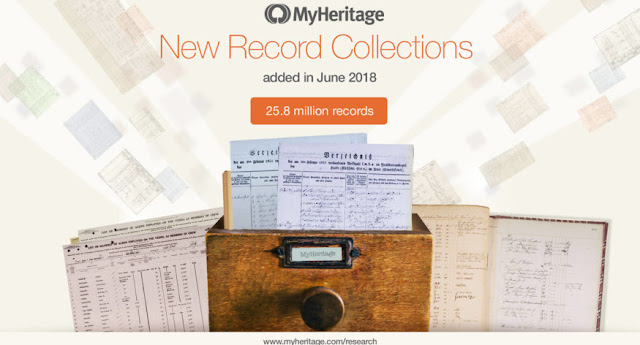 The new additions include millions of records from Ellis Island, West Virginia, and Sweden and hundreds of thousands of records from Denmark. The new records bring the total number of records on the MyHeritage.com website to 9,145,401,868. Yes, that's over 9 billion records.

You can read about the new records on the MyHeritage Blog. See New Historical Records Added in June 2018. If you have Swedish ancestors, you should take note. Here is the explanation of the new Swedish records from the blog post.

This 3,662,252 million historical record collection update to the Swedish Household Examination Books marks the final installment of this collection which now totals 87,401,340 records.

The Swedish Household Examination Books serves as the primary source for researching the lives of individuals and families throughout the parishes of Sweden, from the late 1600’s until modern times. The books were arranged by the Swedish Lutheran Church who maintained the official records of the Swedish population until 1991. Each year until 1894, the parish priest would visit each home, first testing each individual’s knowledge of the catechism, and then collecting information about birth dates, marriages, deaths, changes in residence, etc. After 1894, the parish priests continued their visits but tended to be less focused on the doctrinal exams and more focused on collecting population information. These post 1894 records came to be known as the Församlingsbok.

This June installment is comprised of the records of those who were away from home at the time of the original collection.

This was particularly interesting to my wife who has Swedish ancestry.
Posted by James Tanner at 8:05 AM