Another Home Run for Reclaim the Records


Here is a quote from part of the Reclaim the Records Newsletter announcing the availability of the New York State Birth Index, 1881-1942.


We made a Freedom of Information request to the New York State Department of Health a year ago, in September 2017, and it has finally been fulfilled. The data for 1881-1934 is online right now at the Internet Archive and the remaining data for 1935-1942 will be online by the end of this week. It's over 700 GB of high-resolution images, so it's been taking us a while to upload it all.

There is a long explanation of the process and some really disturbing issues raised by the arguably improper involvement of Ancestry.com.  Although it is apparent that Ancestry.com has certainly interfered with the process of obtaining the records, there is a lawsuit pending that may shed more light on the situation. Here is a quote explaining what has happened so far.


Okay, so let's talk about the elephant in the room. A few of you might have noticed that commercial genealogy behemoth Ancestry.com also put these new New York State birth index files on their website a few weeks ago. However, their image copies of these public records are, as usual, hidden behind their very expensive paywall. In comparison, all data that we at Reclaim The Records ever win or acquire is always published for free, explicitly in the public domain, and is even downloadable.

As a rule, Ancestry refuses to give any credit for records sets that Reclaim The Records has targeted, acquired, and published over the past few years, even though we always share our data freely. So we think it's only fair to give a little backstory here.

We believe Ancestry may have piggybacked on our 2017 FOIL request for these New York State birth index files, thereby getting "first dibs" access to the records (both the original microfiche sheets and the newly-digitized image files) before we did and before the general public. We know for a fact that this is what Ancestry did for an earlier record set from this same government agency, the New York State death index from the NYS DOH. For that set, we received copies of documents from the DOH showing that employees at Ancestry actually cut-and-pasted our own words from our FOIL request, and used our words for Ancestry's subsequent FOIL request, and then even had the state fulfill their request more than a year before ours. And they apparently did not face the same kind of restrictions the state had attempted to put on us, such as the inflated cost of the records, the "exploding offer" ten-day timeframe for providing payment, the sign-off from a state archivist, the condition of the microfiche scanning machine (!), and more.

That whole sketchy situation is the subject of an ongoing lawsuit of ours in the Supreme Court of New York, Albany County, and you can read more about it in one of our previous newsletters. Should we win that lawsuit, we look forward to bringing to the public and the press any documentation we find about the state's financial dealings with Ancestry, which members of the press have described as a sweetheart deal.

So, yes, they did get these records online first. But we got them online and free first, we very likely filed the original FOIL request first, and we didn't have to lift anybody's words or make a backroom deal with the state to do any of it.

If you are interested at all in records in New York, please read the entire newsletter article. For comparison, here is Ancestry.com's listing of the collection. 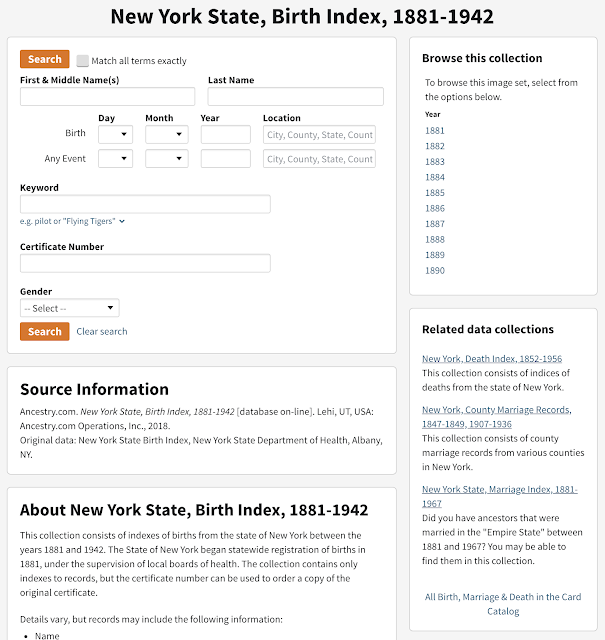 There is no mention of Reclaim the Records or of the same records on Archive.org. It is ethical for these websites to take freely available records, no matter how obtained, and put them behind a paywall? Think about it.
Posted by James Tanner at 7:19 AM