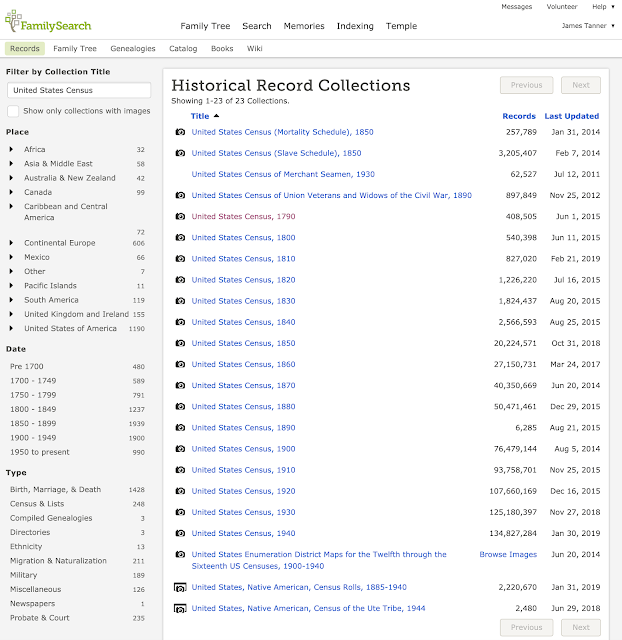 In all the U.S. Federal Census records for all the years, there are millions upon millions of people named. The process of indexing starts with the selection of terms to include in the index. Obviously, the names of the individuals and some of the other information would be helpful in finding what would otherwise be a needle in a haystack. Without an index, the only way that the records could be searched would be named by name page by page. The U.S. Federalist Census was taken by geographic areas called enumeration districts. If you look closely at the screenshot from the FamilySearch.org website you might see a reference to United States Enumeration District Maps. If you were going to manually search the census without an index you could use the geographic divisions of the Census as a starting point and thereby cut down the number of pages and names that you would have to individually search. With today's digitized and indexed records, it is very difficult to imagine the amount of effort it would take to search through even one enumeration district's records.

It also seems hard to understand in today's world that almost all of the U.S. Census originally existed in only paper copies. Here is a short comment on the paper copies from the United States Census Bureau, History.

Since the first census in 1790, the U.S. Census Bureau has collected data using a census "schedule," also called a "questionnaire." Between 1790 and 1820, U.S. Marshals conducting the census were responsible for supplying paper and writing-in headings related to the questions asked (i.e., name, age, sex, race, etc.). In 1830, Congress authorized the printing of uniform schedules for use throughout the United States.

Think about it. Until microfilm came along, the only way for someone to search the U.S. Census was to go to the National Archives or other repositories where the records were kept, as look at them page by page. Since the 1930s when microfilming began to be common and with the exception of the 1890 Census, all of the other U.S. Census year's records have been microfilmed. The advantage of the microfilmed copies was that they could be duplicated and distributed around the country making it possible for more people to have access to the records. But the same problem of the need to search page by page still existed. The first level of organization other than the natural geographic division was a catalog arrangement. The schedules were cataloged first chronologically, then by state and county. Some major cities are listed individually. In these early days, the catalogs were on cards in wooden drawers.

Because of the interest and the need to search through the census records, there were a number of privately printed indexes. Here is a quote from the U.S. National Archives article entitled "1790-1890 Federal Population Censuses -- Part 1."

Privately printed indexes are available for most States or territories from 1790 through 1870 and for the 1890 special schedules. For each state or territory, these indexes typically alphabetize surnames (last names) and then given (first) names or other names and initials of heads of families and specify the county, city, and possibly an MCD. The Microfilm Research Room, regional records services facilities, and numerous libraries or other institutions have many of these indexes, which appear in microfilmed, microfiched, or published form. Many schedules have different kinds of page numbers. Forewards to the indexes, though, usually explain the approach used and may include helpful aids such as census maps, histories, and bibliographies. Some indexes for early censuses also transcribe most census data from the schedules.

If the index was available, it would greatly reduce the time it took to search the census records. But all indexes have their limitations unless they index every word in the documents being indexed, Another problem was that there were few copies of the indexes and searching the census could still involve travel as well as work. Continuing the article from the National Archives, here is a short explanation of some indexes that were prepared by the U.S. Government.


The Microfilm Research room and the 13 Regional Records Services facilities hold microfilmed indexes that the Federal Government prepared for the 1790, 1810, 1820, 1880, and 1890 censuses.

The Government Printing Office published and indexed the 1790 schedules of 11 States, along with Virginia data that was reconstructed from state enumerations from 1782 to 1785 and was intended to replace the missing 1790 schedules. National Archives Microfilm Publication T498, First Census of the United States, 1790, reproduces these works, which are also commercially reprinted. List of Free Black Heads of Families in the First Census, 1790, Special List 34, compiled by Debra L. Newman (Washington, DC: National Archives and Records Service, rev. 1974), indexes names of free black heads of families nationwide. The 1840 census of Revolutionary War pensioners is reproduced on roll 3 of T498.

Index to the 1810 Census Schedules for Virginia (T1019) alphabetizes names, references counties, and notes volume, page, and line numbers of the schedules. Volume numbers that the index notes appear within the microfilm rolls, not in this catalog. Compilation of Tennessee Census Reports, 1820, National Archives Microfilm Publication T911, includes alphabetized indexes, partly transcribed data, and copies of an original 1820 schedule. Index to the Eleventh Census of the United States (M496) indexes the remaining 1890 population schedules. Roll 1 covers alphabetized surnames from A through J; roll 2, from K through Z. After the surname, the given or middle names and also initials are alphabetized. The numbers on the right-hand side for the cards refer to those stamped on the schedules.

Stay tuned for more about the indexing of the Census Records.

Here is a link to the previous posts in this series: