Don't rely on tradition, look at the sources!

Family tradition can become almost hallowed. Repetition is extraordinarily pervasive in genealogy. As a result, it is absolutely necessary to look at original sources whenever possible. I have used this example a few times before, but it is a good example and bears repeating.

Here is a copy of the 1852 California Census. The complete citation is: Ancestry.com, California State Census, 1852 (Provo, UT, USA, Ancestry.com Operations, Inc., 2010), www.ancestry.com, Database online. Record for Sydney Tanner. [Note: Sidney Tanner's name is usually spelled with an "i" as in Sidney] 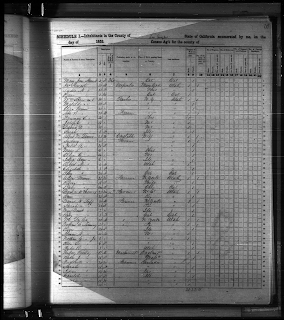 From this record there are two things that contradict much of the folklore in my family history. Our family has traditionally spelled my Great-great-grandfather's name with an "i". However, it is clear from this record that someone spelled his name with a "y". By looking at this "original" source can this controversy be settled? The answer is no. There is no way to determine who provided the Census data to the enumerator. There is also no way to determine if the spelling originated with the enumerator. So what should be done? Do not rely on tradition to determine things like name spelling. I have been helping people with their research and come across this problem and had the person say, "That can't be my grandfather (whatever) he spelled his name with an "i". Alternative spellings are very common, especially, as here, in the mid-19th Century when some of the people were not literate. By the way, Sidney spelled his name with an "i" when he wrote it.

Also, if you were searching for Sidney, you may overlook the alternative spelling. Don't rely on family tradition as to how the name was spelled.

Another significant lesson from this one Census sheet is the location. While in California, my Great-grandfather Henry Tanner was born in 1852, the year of the Census. If you look at the Census Record, you will see that it is for "Los Angeles" County. Now, everyone knows that San Bernardino is in San Bernardino County. Right? In fact, if you look at the dozens of submitted records on Henry Tanner, you will see nearly everyone lists his birth in San Bernardino County. Here are a few examples from Ancestry.com Family Trees: 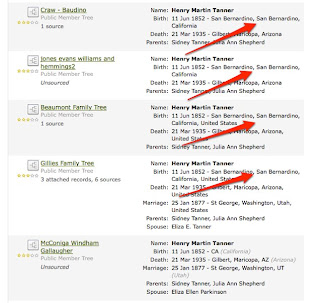 I could go on and on, there are many more examples. Note the last entry in the snap shot lists only California (abbreviated no less) as the birth place. A few minutes with any number of books or online sources will show the date San Bernardino County was organized, 1853. So, if Henry Tanner's birth date is accurate, he was born in Los Angeles County. Who cares? In this case it is going to be impossible to correct all of the hundreds of citations to the wrong birth place. But imagine you are looking for a relative in an eastern state, such as Ohio or Pennsylvania. Do you think the county boundaries have changed in the last 150 years? You bet. For an example, using Pennsylvania, see Genealogical Maps of the counties of Pennsylvania. Department of Internal Affairs. Thomas A. Logue, secretary. Compiled and prepared by the Bureau of Land Records - 1933. There are several online renditions of this map. You can also use a program such as AniMap, from Goldbug  Software.

This example is applicable on a number of levels. The correct information is readily available but the incorrect information has become a family tradition, published so many times that no one would question its authenticity. What is worse, is that nearly all of the people who have this listed incorrectly, when it is called to their attention react with "Who cares it is close enough?." In genealogy wrong is not close enough.
Posted by James Tanner at 6:00 AM