A Macintosh user's view of Family Tree Maker for the Mac 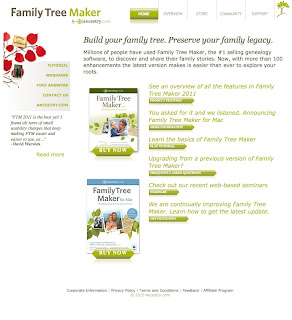 This post is likely to become a series, I can feel it in my bones. This past week or so, the genealogy Blog world was filled with announcements and commentary about Ancentry.com's release of Family Tree Maker for the Apple Macintosh. Most of the posts were summaries or copies of the news release. I debated ordering a copy of the program, partially because of the price, $79.99 on Amazon. (I realize that there were promotional prices previous to its release, but I unfortunately, I did not take advantage of the pre-release price). Another reason for pausing in making an order was the fact that I already have several other programs on my computer including the PC version of Family Tree Maker 2010 (maybe a reason for buying the Mac version) and others which I will get into in future posts. Ultimately, I was too curious about how the program would be ported to the Mac and ordered a copy which arrived late yesterday.

Some of the many, many genealogy programs I have tried over the years have what I refer to as a "deal breaker." That is a feature or lack of a feature that I feel is essential to my use of a program.  Before we go too far with my evaluation of Family Tree Maker for the Mac, I must admit that initially the PC version had (no longer an issue) a "deal breaker" for me. The program does not automatically support LDS Temple Codes. These are the identities of the Temples in a five character ID showing where the LDS Ordinances were performed for the individuals. Even Personal Ancestral File has three character codes, but it did have codes. There is a place field for LDS Ordinances but entering a Temple Code raises a question about the place and refers the user to a standard list of place names.  By the way if someone needs to know the codes, here is a link to the most current list. In all fairness, I did find a very acceptable work around and so the problem is no longer a deal breaker issue. I will get to the issue of LDS support later.

At this point, I need to explain, especially to anyone reading this Blog for the first time, that I use iMacs and MacBook Pro computers. I run Parallels Desktop which allows me to simultaneously run both Mac OS X Snow Leopard and Windows 7 at the same time and interchange data between the two operating systems. I hesitate to recommend using a dual operating system to most people because most of the people I know have a lot of trouble with one. So, I can have both the Mac and PC versions of any program up and running on my computer at the same time.

The Family Tree Maker program for the Mac came with two CDs. I loaded the program without any problems into the Mac and then imported a GEDOM copy of the current version of my master database containing 6938 individuals and 2418 families with 547 sources. I must comment here, that this is the verified version of my genealogy, I have other files with many more individuals. After the file loaded, I got the usual GEDCOM notice to "View Log File" with all the stuff not recognized in the transfer (still another topic for a post). When I clicked on the link to View the Log File, Parallels Desktop started up and the file turned out to be a PC file. Interesting bug. I don't know how the file would be viewed if I didn't have Windows running on my computer because I can't isolate the problem. But it sure looks like there are still some porting issues with the program right out of the box. However, there didn't appear to be anything of consequence in the Log File.

The first thing I noticed with the new Mac version is (hooray) all of the Temple Codes immediately came up. Also, the notation "BIC" also appears. It looks like the Mac version is much more up-to-date than the older PC version. As I indicated at the beginning this is post is going to be continued. First impressions of the new program are very good. Stay tuned.
Posted by James Tanner at 8:24 AM