I was reading a Blog post that made recommendations to genealogists about purchasing a digital camera. One of the items repeatedly mentioned, but not explained was the camera's resolution. The only comment made for each level of camera was that the resolution was "good enough" for genealogists. Please understand I am not being critical of the overall message of the post, I am merely observing that the information may have been incomplete concerning a camera's "resolution" and given a false impression.

If you would like to see what ultimate resolution looks like, try zooming in on London on 360Cities.net.  Believe me, this photo is not something you can do at home with your $300 camera. But let's get serious, what is camera resolution all about. The photo is reference of London holds 80 gigapixels of information in one photograph. That's approximately 8,000 times as much information as the average 10 Megapixel digital camera. Image resolution is a general term that applies to the detail an image holds whether it be from a digital, film or other type of image. Put as simply as possible, the higher the resolution the higher the image detail. Warning, from here on I get a little bit technical.

The one most familiar way of referring to resolution to owners of digital cameras is pixel resolution or pixel count. It is usually expressed by two whole numbers such as, 640 x 480 or something similar. It can also be expressed as an approximate number of the total number of sensors in the camera expressed as pixels usually in megapixels. Megapixels can be calculated by multiplying the number of pixels, or image units, per column by the number of pixels in row and then dividing by one million. None of these pixel resolutions refer to a true resolution, they are merely an approximation. Doubling the number of Megapixels does not double the resolution it only increases the resolution by 40%. Pixel count is a square function. A tiny linear resolution increase results in a huge total pixel increase, since the total pixel count varies as the total area of the image, which varies as the square of the linear resolution. For more information on this subject search under the terms, "megapixel myth."

Spatial resolution measures the number of lines that can be resolved in an image. Spatial resolution depends on the whole system including the lens. For example, if you purchase a 5 Megapixel camera with an exceptionally good lens, your resolution could be better than a camera with a 10 Megapixel sensor and an inferior lens. The rule in photography is that the picture will never be any better than the camera lens. In another example, the highest resolution camera in the world will not produce a high resolution photo if it is out of focus. If you are concerned about the clarity of an image, then you need to address the number of independent pixel values per unit length.

Some of the other types of resolution are spectral that refers to the resolving differences in the light wave length and radiometric which measures the differences in intensity expressed as the number of bits such as 8 bits or 256 levels of gray.

OK, so here is the crux of the whole discussion, the resolution of an image produced by any particular camera depends on the whole camera system. A high megapixel count may be negated by a poor lens that gives a fuzzy image. The best lens in the world, however, will not produce an image resolution that exceeds the pixel count and the quality of the camera's sensors.

Lenses are usually rated on their ability to resolve an image. To some extent, you get what you pay for. You cannot expect that an inexpensive point and shoot camera will have a lens that is comparable to a more expensive interchangeable lens camera. The new compact digital cameras come with sensors advertised as having 10 or even 12 or more Megapixels. But the lenses that come with such cameras are seldom as good as the cheapest interchangeable lens camera. 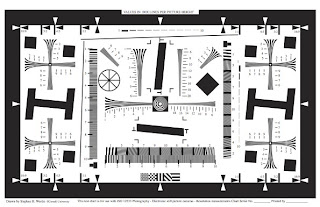 This is a snap shot of an ISO 12233 Test Chart used to determine the resolution of lenses. The actual chart is 15.75 inches by 8.45 inches. Click here for a printable version of the chart.

To summarize, the resolution of a final picture is a function of the entire camera system, the lens, the focusing ability, the number of sensors (Megapixels) and the overall quality of the components. Most pictures that are shot with a hand held camera are probably slightly out of focus.

Now what does all this mean to a genealogist? If you are taking photos of people and events, almost any of the commonly available point and shoot cameras do an adequate job. I am partial to Canon, but Nikon and many other brands have good quality cameras. If you are using your camera for taking notes while doing research, the same point and shoot camera will do an adequate job. However, if you are taking photos for the purpose of archiving documents you should probably be aware that even expensive digital cameras do not do as good a job as a flat bed scanner. You might also like to know that archivists presently use cameras in the 50 Megapixel range costing thousands of dollars.

I am presently using a 15 Megapixel camera and the quality of images of documents is fairly good, but a digital photo of a film photograph is noticeably inferior to the same photo scanned on a flat bed scanner. I might note that if you are merely trying to preserve the information, such as taking a photo of a book page found in a library, if you have an adequate camera, the quality of the images is going to depend on how steady the camera is held, not the resolution of the camera. In purchasing a camera, the quality of the lenses and the rest of the mechanism is far more important the raw Megapixel
Posted by James Tanner at 6:00 AM