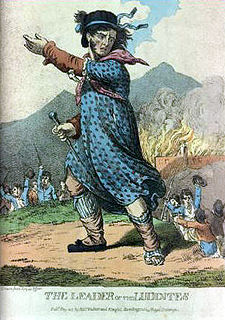 This image is in the public domain.
As defined by Wikipedia, "the Luddites were a social movement of British textile artisans in the nineteenth century who protested--often by destroying mechanized looms--against the changes produced by the Industrial Revolution, which they felt were leaving them without work and changing their entire way of life." By extrapolation, a "luddite" is anyone opposed to the advances of technology.

As genealogists we are current faced with tremendous technological changes. These changes also affect our daily lives outside of genealogy; how we eat, sleep, travel and what we do in our free time. Other changes have affected our work and like the Luddites, many of us are fearful that we will lose our jobs (if we haven't already lost our job).

In a sense, genealogy is part of a larger technological change affecting all activities that deal with the creation and dissemination of information. It is not that there are a few new gadgets around like iPhones and iPads, there is a deeply fundamental way in which information is handled and considered. Information itself has become a commodity to be bought and sold on the modern market place. It is no longer a byproduct of obscure academic activities, but is a huge and difficult giant looming over every human activity. Rightly, we have passed from the Industrial Revolution, to the Industrial Age, then to the Post-Industrial Age to the current information Age.

RootsTech, by its very name, underscores the impact technology is having on an otherwise conservative activity like genealogy. The incedents of change are everywhere apparent, from the pervasiveness of electronic devices to a shift in the way source documents are preserved and displayed, all aspects of genealogical research are undergoing radical shifts in their methodology and practice.

So, who are the current luddites? Why would anyone oppose the demonstrated advantages of online research, digital cameras, scanners, online databases and the other obvious effects of technological change?

Let me use a couple of examples of what I would consider to be modern luddites.

Last week I wrote a post about the demise of Personal Ancestral File (PAF). I was not particularly surprised to receive comments from readers who objected to my characterization of the program. In one case the commentator asked, "What is wrong with it if all you want is a holding program for your information." The answer is nothing is wrong with it. But in another comment, the commentator said, "I took a couple classes from the Salt Lake Community College on genealogy last semester and both of the teachers told us in the first lesson to go to FamilySearch.org and download PAF." If in 2001, I went to a local community college and took a course on word processing, do you think I would stay in the class if the instructor started by telling us to use MacWrite or WordStar as our primary program?

What I mean by saying there is nothing wrong with using PAF is that there are no software police out there making sure you use the latest and best possible program. I you choose to run Windows 95 on your Intel 80486 based computer, no one really cares. But don't expect to participate in most of the advances in information technology available over the Internet using your computer system. Additionally, on a program by program basis, it is very likely that few of the currently sold programs (except PAF) would run on that system. What is objectionable is when you (running that system) and especially others who should know better, actively promote using the older technology at the expense of having compatibility with newer operating systems. One hardware example, none of those older systems had USB connectors introduced in 1996 which are the basis of nearly all external devices available today.

One individual I talked to recently, related how he had been in a certain occupation all of his life and when the business decided that computers were necessary, he quit his job because he didn't want to learn about computers. The conversation took place in the context of genealogical research. Opposition to technological change can be as blatant as changing jobs to avoid computers or as subtle as recommending an out-of-date program for primary use.

What about using a program like PAF for "holding data." We still get people bringing in 5 1/4 inch floppy disks with old PAF data files. Fortunately, there are a few people that still have computers and drives that support that disk format and that can read the old PAF 2.3 files, but the possibility of transferring the data is fast disappearing. At the recent RootsTech conference representatives from FamilySearch emphasized that they were fully committed to an only browser based genealogy model and were not thinking of supporting PAF again at all.

Modern luddites may not be entirely anti-technology, they do not have to refuse to use telephones and TVs to be luddites, they can simply refuse to acknowledge when a technology has substantially changed and continue to cling to the older technology without any really valid reason for doing so. To repeat, what is even worse, is then they are in a position to make recommendations and they either intentionally or negligently espouse antiquated technology.

One last example involved a discussion by William Barrett, a professor and BYU about the need of genealogical societies to be in the 21st Century. Later in the day, I happened to overhear a conversation between a representative of a society and one of the Bloggers. The society member was bemoaning the fact that the members of her group were actively opposed to having webinars or being involved in any other online activities including probably a website. The conversation would probably have gone unnoticed had I not just heard Professor Barrett.

What is the solution? Education and patience.
Posted by James Tanner at 12:30 PM