Not all maps are created equal. As a research genealogist you should be routinely looking at maps of almost every kind and description, old, new and online. In a time when Google Earth has packed a huge amount of information into every view, it is still necessary to look at other types of maps. Everything from Sanborn's old insurance maps to modern street level zooming maps of almost everywhere. You may find, as I did recently, that even though two families lived in different states, they really only lived about 15 miles from each other! Along with ignoring history or being ignorant of it, lack of map education is one of the great challenges facing the expansion of genealogy.

In my last post, I got a little emotional about the lack of history education. Well, now I am starting in on geography. For example, here in Arizona starting in 2012 this is the high school graduation requirements for students in social studies: Grad requirement effective for the graduating class of 2012 include: “b. Three credits in social studies to include the following: i. One credit of American history, including Arizona history; ii. One credit of world history/geography. iii. One-half credit of American government, including Arizona government; and iv. One-half credit of economics.” (A.A.C. R7-2-302.01). See Education Commission the States for your state's requirements. In four years of high school, students get one class on world history and whatever geography that is included!


When I used to teach Spanish for five years at a local community college, I would usually start the year asking what was the name of the state to the south of Arizona? Ask yourself the same question and let me know the answer. In a class of over thirty Spanish students, usually not one person could answer the question. No, I am not going to tell you, go look it up.


This Blog is read almost entirely by genealogists. How many of you out there have had a topographical map in your hands recently? How many of you would recognize one if you saw one? OK, collectively we are mostly way above average in knowledge when it comes to some areas including interest in history and maps. But I suspect, from dealing with thousands of people over the past few years that geographic knowledge is not very great even among genealogists.  That said, let's get down to business.


Here is a screen shot of a typical topographical map: 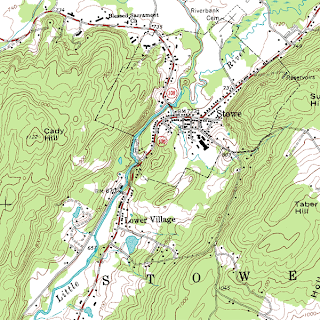 By definition a topographic map is planar representation of the natural and cultural features on the world's surface. For genealogists, topographical maps are a rich resource of information about the localities where our ancestors lived and where they moved and traveled.

Usually, a topographical map will give you information about
For genealogists, topographical maps include cemeteries, schools, churches, government buildings, and many other useful references. You haven't really been somewhere, even if you go there in person, unless you have seen a detailed map of the area. It is too easy to overlook or be unaware of what you are looking at without a map reference to give you the perspective of the area.


The colors on a topographical map are significant. Black shows cultural (i.e. man-made) features.
Red is  used for paved roads and the accompanying symbols and identifications. Orange indicates unpaved roads and unnamed roads and streets. Brown is used for contour lines, elevations, and to show sand and eskers. Blue represents water features. The names of water features are also shown in blue. Green is used for wooded areas, orchards and vineyards. Grey is used to show map information and legends. Sometimes purple is added to show added information such as updates.


One of the most prominent features on topographic maps are the contour lines. These lines represent physical features on the ground that have the same elevation measured in height above sea level measured in feet or meters. In making a topographical map, the map maker (cartographer) surveys the land both in distances and altitude. Contour lines connect points of equal elevation. Each map has a standard interval for contour lines. So that the slope of the land can be represented by the spacing of the lines. Contour lines that are close together show a steep change in grade, lines further apart show little or no slope. For example, if the contour interval were 40 feet, there would be a 40 foot difference in elevation between two different contour lines.


This is just a start to a series on maps. Stay tuned for the next installments.