In my first post in this series I asked a question, "What state lies to the south of Arizona?" I have yet to get a correct answer to the question. But there is a follow up question, "What is the name of the country to the south of Arizona?" The answer to the second question helps clarify the answer to the first question. Both questions point up the fact that there is an abysmal lack of geographic knowledge in the U.S. population. Hopefully, genealogists will be like stamp collectors and learn about all the countries of the world and a little history on the side.

To accurately identify someone you need to know three things; a name, a place and a time. This is deceptively simple however, names are difficult and sometimes elusive as are both places and times. Places can be best identified and pinned down using a map. You may think you know where your ancestors lived or were buried until you try to go there. You will soon learn that knowing the name of a place and finding that same place either on a map or in the real world, is entirely something else. Since it is given that you are going to use maps, you need to understand some basics.

Now back to geography and topographic maps. We are back to contour lines. Just in case, here is another example showing contour lines: 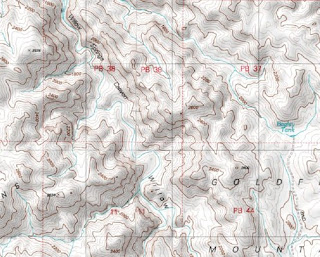 Contour lines represent a series of points of equal elevation. The map screen shot above uses both contour lines and shading to show the changes in elevation. As you can see, lines that are closer together represent steeper slopes. Other noticeable features of topographical maps are the grid lines. Grid lines give the map makers the ability to represent any point on the ground. Each of the grid lines has a number, usually corresponding to latitude and longitude. The intersection of any point on the map is a combination of the two numbers. In addition, by looking at the contour lines, the vertical altitude of the point can also be determined. Here is another screen shot of a aerial map showing the numbered grid lines: 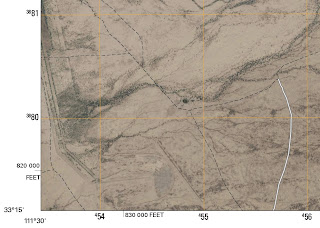 Historically, there were four different types of map grids used in the U.S.
The Geographic Coordinate System is based on degrees of latitude and longitude. Latitude lines run parallel to the equator and are divided into 180 equal portions from north to south. In the northern hemisphere, the lines are numbered from 0 degrees to 90 degrees north and in the southern hemisphere the numbers are from 0 degrees to 90 degrees south.  Longitude lines (also known as meridians) circle the earth perpendicular to the equator. Major longitude lines are numbered in degrees with world maps showing lines every 30 degrees east and west of the 0 degree line or prime meridian which passes through the Royal Observatory at Greewich.  The opposite side of the world from the Prime Meridian is the International Date Line.

Most maps showing a small portion of the earth's surface represent the lines as intersecting at right angles. However, because they are really drawn on the surface of a sphere, they do not meet at exactly right angles except at the equator. At the equator, the distance between the lines of longitude is the same as the latitude. As the longitude lines are projected both north and south, they meet at the poles, so in reality, there is small difference in the width of any map segment defined by a longitude line.

Why is this important to genealogists? Well, in eastern Arizona for example, there was more than one land survey and because of cumulative errors introduced, in part, due to the curvature of the earth, the two surveys do not match up. If you are trying to locate a piece of property along the survey discontinuity, you will find all sorts of errors.

The Universal Transverse Mercator Geographic Coordinate System (UTM) is a pseudocylindrical conformal projection. (That really helps doesn't it). What you need to know about this type of representation is that this map projection is an attempt to depict areas of equal size towards the poles.  Most topographical maps published recently use the UTM system. In older maps the UTM system is shown along the edge of the map. Distances and locations in the UTM are measured in meters. The average circumference of the earth is 40,030,173 meters so that there are 10,007,543 meters north or south of the equator in each hemisphere. In order to make the numbers less imposing, the earth is divided into UTM Zones, each of which is 6 degrees of latitude wide, so there are 60 zones around the world. Here is a representation of the U.S. showing the UTM zones: 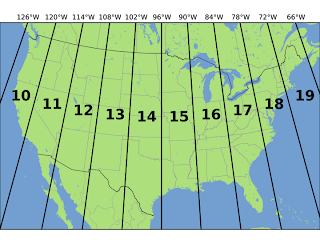 http://en.wikipedia.org/wiki/File:Utm-zones.svg
Quoting from Wikipedia, "A position on the Earth is referenced in the UTM system by the UTM zone, and the easting and northing coordinate pair. The easting is the projected distance of the position eastward from the central meridian, while the northing is the projected distance of the point north from the equator (in the northern hemisphere). Eastings and northings are measured in meters." For example, the geographic coordinates

Well, one thing I learned writing this post is that Wikipedia is also in Navajo. (You don't want to know how I found that) Anyway, here is the point. Maps are essential to making accurate identifications of individuals in many cases. If you find your ancestor had a land grant or homesteaded, you can locate where they lived on a map and determine the likely location of any records that might have been generated as result of their living in a certain area. In order to adequately understand historic maps, it is essential that you have a basic understanding of map projections.

Next time, I will continue with State Plane and State Land Survey maps and we will also look at scale.
Posted by James Tanner at 7:35 PM