Waiting to Merge -- an assessment of the status of Family Tree

If you look carefully at the manual for FamilySearch.org's Family Tree (FT), you will find a chart near the end of the online PDF file, that shows a comparison between the features planned for Family Tree and similar features in the older New.FamilySearch.org (NFS) program it is replacing. Absent any other news from FamilySearch other than presentations by FamilySearch representatives, the manual is the "definitive" source for the status of the program. The latest version, as of the date of this post, is 6 August 2012.

I want to focus on the features that are now implemented and those that are yet to come. Without reproducing the entire chart, which is found in the PDF document listed on the first page of the Help Center menu (reached by clicking on the Help link at the top of the FamilySearch.org startup page), here is a sample of the first part of the chart only. 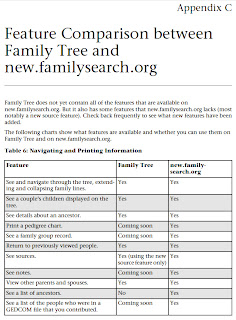 Before, getting further into the list, a note of explanation. The feature list for NFS is used as a comparison, but there are certainly features in FT that are not available in NFS. So the possibilities are as follows:
The chart classifies the features as either present (with a Yes) or coming soon sometimes with an explanation.

So what is presently missing from FT? Here is a summary:
The only real deal killer for me is the lack of a merge function and the associated functions. I assume that if FT has a true merge function coming, that there will be no need to "combine" records as it is now done in NFS. I would assume that the mentioned merge features should have been put in the category of not needed in FT?

Why is the lack of a merge feature a deal killer right now? Because there is no way to further edit your online files once you reach a place in the file where there are duplicates. For example, I now find in the file that my Great-great-grandfather Sidney Tanner has quite a number of variations of parents brought over from NFS. He is also duplicated in the lists of children. Without the ability to sort out this roadblock, I am essentially stopped from further progress in sorting out the bad data from NFS.

If you study this list carefully, what you really see is a program that is almost fully functional. All of the the other necessary features, that I did not list, are there and working just fine. Meanwhile, I will just keep waiting and watching.