Away from the computer out on the Mormon Overland Trail

From 1847 until 1868 when the railroad was completed into Utah, tens of thousands of pioneers walked and rode the Mormon Trail. Originally beginning in Nauvoo, Illinois, the beginning of the trip across the continent of more than 1300 miles, moved slowly west with the building of the first transcontinental railroad. There are volumes of stories about experiences on the trail and many of my ancestors crossed the country on the wagon trail and some died. This last week, I had the opportunity of exploring a small part of the trail where it lies between Grand Island and Kearney in Nebraska.

In Nebraska, there are several roads and the railroad that follow the path of the pioneers and other trails wind through the same area such as the well-known Oregon Trail. Recent development, including planting a whole lot of corn, have erased visual evidence of most of the trail. The Lincoln Highway, the first paved transcontinental highway in the United States, also follows the Trail. The Hall County Historical Society members preserved one of the last visible, original, unpaved sections of the trail at a location called the Murdock Site. Here are some photos with commentary.

These photos were taken at the Murdock Site located two miles south of present-day Alda, Nebraska. The first picture is Ronnie O'Brien, our tour guide and a local expert on the history of the area. She is standing next to a sign showing that the road has been re-aligned to accommodate the preservation of the site, a rarity in Nebraska where corn rules. 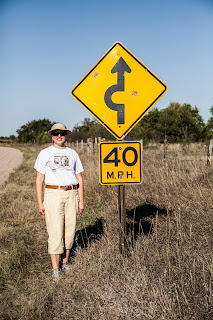 This is the sign on the site. It says, "Welcome - Murdock Site, See the old California Overland Trail - Omaha Ft. Kearny Road and Mormon Trail. About noon on Thursday, April 29, 1847 Brigham Young and his first pioneer company crossed this site on their way to Salt Lake." We know the date and time because of a journal entry from William Clayton, one of the pioneers in the company. 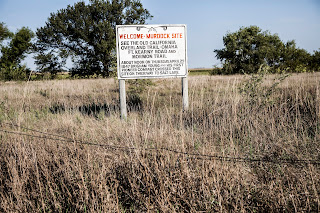 This is a shot of the prairie. This is about as close as it gets to the original grass cover in central Nebraska. This small site of 2.4 acres was only preserved from corn planting because of the efforts of the historians. 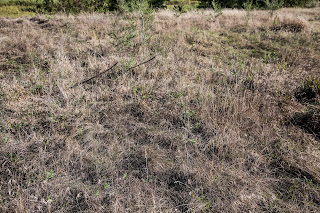 The line of trees is the Wood River, mostly dry right now because of the drought. The trees only grew along the river, the rest of the prairie was grass. 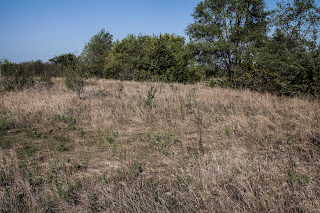 This is one of several stone markers scattered around the area marking portions of the trail. But most are on private property where the trail is no longer visible. You can click on the image to see a larger version and read the inscription. 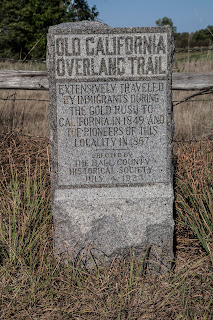 OK, so how interesting is grass? But the next two photos show the actual trail. It is hard to see unless you are standing right there, but the center-right part of the photos is a depression that was made by the thousands of wagons crossing the plains. 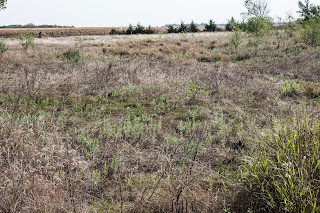 The site was noteworthy because of a low ridge, which dropped off into the Wood River bed. Historically, Indians would drive buffalo (American Bison) along the river to this point and then there were two holes or depressions where some of the Indians would hide and when the herd approached they would jump up, out of the holes and scare the herd into turning over the drop off. The Indians could then kill some of the buffalo that fell off the edge. 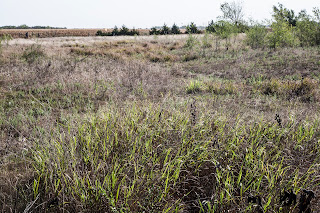 Nothing beats getting out and seeing the sites for yourself. Thanks to Family History Expos, Holly Hansen and Ronnie O"Brien for a wonderful experience.
Posted by James Tanner at 7:33 AM