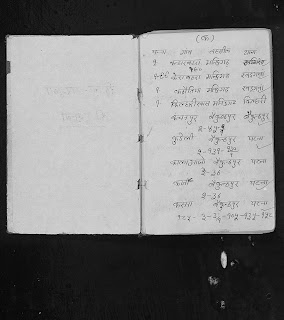 These are some of the oldest records I have seen on FamilySearch.org's Historical Record Collections. They are described as


Hindu pilgrimage records kept by a Pandit Madhukar Balkrishan Akolkar at Trimbakeshwar, Maharashtra, India. They include records for people from Maharashtra, Gujarat, Punjab and Rajasthan, India. These records are created and updated when family members pass on. The registers are arranged by "caste" and contain native place, names of family members, the last occasion on which a family member came to this place of pilgrimage and made an entry in the register, the ceremony performed at the time and offering made to the priest. No women are mentioned unless their deaths are referred to indirectly.

There are 191,193 images. Further explanation of the records from the Research Wiki says:


The ancient custom of keeping family genealogies is not well-known today to Indians settled abroad. Professional Hindu Brahmin Pandits, popularly known as "Pandas", kept detailed family genealogies over the past several generations at the Hindu holy city of Haridwar. The registers are handwritten, having been passed down to them over generations by their Pandit ancestors, and are classified according to original districts and villages of one's ancestors. Special designated Pandit families are in charge of designated district registers, including ancestral districts and villages that were left behind when Hindus had to migrate from Pakistan to India after the Partition of India.

In several cases, present-day Hindu descendents are now Sikhs, Muslims, and even Christians. It is not uncommon for researchers to find details of up to or even more than their past seven generations in these genealogy registers.

I think we get pretty focused on our own narrow area of research and tend to forget the rest of world out there is probably seeking their ancestors also. There are some good reminders coming up in the Historical Record Collections.