I read it in the newspaper

Researchers have a tendency to look for records in or around the place were the ancestor was born, lived or died. But sometimes even ordinary people were mentioned far from their original locations. Here are a couple of examples of records both near and far.

You would expect to find an obituary notice in a local paper, but in when your ancestor lived in a very small town or village, the report may have appeared in a county wide or multiple county newspaper of more general circulation. My Great-grandfather Henry Martin Tanner died on 21 March, 1935 in Gilbert, Arizona, quite a distance from his hometown of Joseph City, Arizona where he was buried on 24 March 1935. One news account of his death appeared in a newspaper in the next town, Winslow, Arizona on 29 March, 1935. Notice that the date was after the funeral and burial but in one of the towns near his home. 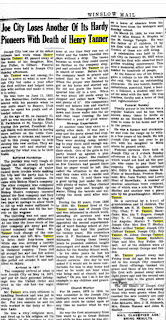 However, when his wife, Eliza Ellen Parkinson Tanner died on 17 August, 1930, an obituary appeared in The Salt Lake Tribune in Salt Lake City, Utah on 25 August, 1930. Shortly after her death but in a newspaper remote from where she was living when she died and where she was buried.

How would you know to look hundreds of miles away in a major newspaper in Salt Lake City, Utah about 560 miles from Joseph City, Arizona? You wouldn't. The point is that you may need to search regional newspapers and even those in other states. My Great-grandmother lived her entire life in Joseph City, Arizona and although active in her church, was not a traveler. But the newspapers of the day, reported the event of her death, even in an adjoining state.

If your relatives were at all a prominent citizens of the community, county or state, you cannot rule out newspaper accounts of their lives and deaths anywhere across the world. I could give numerous examples, but in almost every case, you need to expand your search to county newspapers, state newspapers and even newspapers in adjoining states.