An Illusion of Influence?

In all our online blogging, tweeting, Facebooking and reveling in our huge online databases, I believe we acquire an exaggerated belief in our own influence.  I have spent three full days now at the Family History Library and have seen only two or three additional people who may have attended some of the RootsTech activities. Nearly all of the people I talk to in my current genealogical activities are not even vaguely aware that there was a conference or even that genealogical blogs exist. In fact in many classes, even those with experienced researchers, few people are even aware that blogs about genealogy exist. In fact, there is a general antipathy about genealogy in general.

So how does my perception compare to the online chatter about taking genealogy to the masses? Will developing a new program or redesigning a website attract a larger following? For the last few months, my wife and I have joined, what the news reports are calling, the Zero TV generation. We quit our cable TV service altogether and donated our two TVs to Goodwill along with a pile of old VCRs and DVD players. We have moved entirely to Internet connections.

Since I am currently sitting in a hotel in Salt Lake working away at the Family History Library every day, all day, I checked into the cable TV service in the hotel room. Guess what? Nothing has changed. There were commercials on nearly every channel and simply because the WiFi in the hotel is so slow as to be almost useless, we watched a re-run of a Sherlock Holmes episode on public TV channel.

So how is our online message about genealogy and family history getting through to the general population?

It is true that some of the genealogy blogs are immensely popular in the online genealogical community, but compared to the greater community of genealogists, many of whom have no contact with or awareness of the online segment of our community. Blogs and other online genealogical activities may attract respectable numbers, but the numbers of adherents are spread thinly across the entire world so it take a concentration of interest such as RootsTech to bring together this diverse group.

So before we break our collective arms patting ourselves on our collective backs, maybe we should take a step back and realistically assess who is actually listening to all this online activity? I had one indication last week when I taught a class of new volunteer missionaries at the Mesa FamilySearch Library. We spent a good portion of the class getting one of the four new workers to log on to FamilySearch.org. Even though this person was volunteering to work at the FamilySearch Library, she had apparently never seen FamilySearch.org.

My perception of the issue comes from my collective experience of teaching class after class where the attendees profess utter ignorance of any online activities pertaining to genealogy. In all of my associations with people outside of the focused online genealogical community there is not so much as a hint on interest in anything pertaining to our online world. There are even few of the members of my immediate family that read genealogy blogs, even if they do read mine from time to time. Some of my best friends, outside the genealogical community, are only vaguely aware that I do something involving family history but they aren't quite sure what it is.

I turned to Alexa.com for some idea where we, as genealogists, might be out there in the wider online world. The results, comparing the traffic for Ancestry.com, FamilySearch.org, MyHeritage.com and findmypast.com is pretty interesting. Here are the three graphs, comparing traffic rank, reach % and pageviews %: 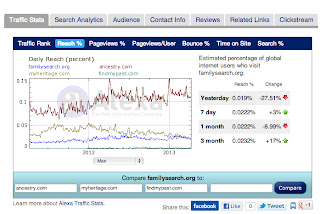 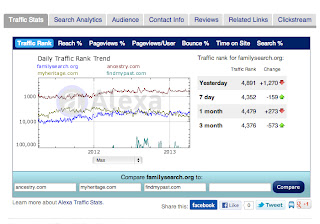 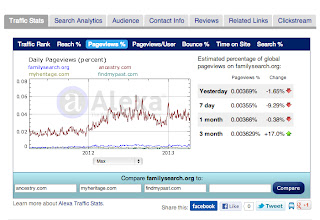 Here are the Alexa.com explanations for what we see:


What is Traffic Rank?
The traffic rank is based on three months of aggregated historical traffic data from millions of Alexa Toolbar users and data obtained from other, diverse traffic data sources, and is a combined measure of page views and users (reach). As a first step, Alexa computes the reach and number of page views for all sites on the Web on a daily basis. The main Alexa traffic rank is based on a value derived from these two quantities averaged over time (so that the rank of a site reflects both the number of users who visit that site as well as the number of pages on the site viewed by those users). The three-month change is determined by comparing the site's current rank with its rank from three months ago. For example, on July 1, the three-month change would show the difference between the rank based on traffic during the first quarter of the year and the rank based on traffic during the second quarter.

What is Reach?
Reach measures the number of users. Reach is typically expressed as the percentage of all Internet users who visit a given site. So, for example, if a site like yahoo.com has a reach of 28%, this means that of all global Internet users measured by Alexa, 28% of them visit yahoo.com. Alexa's one-week and three-month average reach are measures of daily reach, averaged over the specified time period. The three-month change is determined by comparing a site's current reach with its values from three months ago.

What are Page Views?
Page views measure the number of pages viewed by site visitors. Multiple page views of the same page made by the same user on the same day are counted only once. The page views per user numbers are the average numbers of unique pages viewed per user per day by the visitors to the site. The three-month change is determined by comparing a site's current page view numbers with those from three months ago.

In each of these cases, you have to take into account that overall traffic on the Web increases, so maintaining a percentage really means that your audience is increasing, but there is no real way to see or measure the increase. You can only assume that it occurs. Of these charts, I would focus on page views, since that measurement alone indicates greater market penetration and is not relative to the overall traffic on the Web. As you can see, over the past two years, there has been only a slight change, with three of the four big genealogy websites hardly showing in the chart.

Perhaps we need to rethink the idea of genealogy altogether?