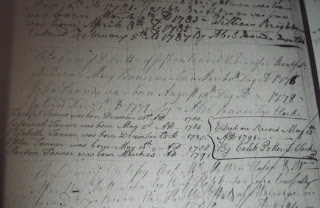 This series of blog posts is intended to show the methodology of searching for documentation for an ancestor. The above image is of the Hopkinton Town Record showing the dates of the birth of the children of Joshua and Thankful Tefft Tanner, including the birth of John Tanner, their illustrious son. Interestingly, this record has been sitting there since it was written back in the 1700s but never referenced by any of the many surname books on the family. The town clerks recorded the names and dates of birth of all of the children of Joshua and Thankful Tefft Tanner. This is an indication of the changes in the attitudes of the researchers towards family history or genealogical research.

At one time, it was acceptable if the researcher just said that he or she had “looked at the records” and recorded what they found. The problem was that subsequent family historians did not feel compelled to repeat the research, but accepted it on its face. One of the problems created was that as time passed, the copies of the original research became corrupted by errors. The original research may also have been faulty, but remained uncorrected. As copies were made of copies, more errors began to arise until we have today’s circumstances with dozens, perhaps hundreds of variations in the pedigrees and the facts concerning the family.

The current major emphasis on sources has started the process of correction and documentation but there are still a multitude of copies being made every day through the electronic online family trees.

Back to the research. With my ancestor, Thankful Tefft married to Joshua Tanner, there is a specific goal. She is a descendant of three of the Mayflower passengers who arrived in the New World in 1620 and settled in what became Plymouth, Massachusetts. Their lines for at least 5 generations down are exhaustively documented and any controversies or questions about birth, marriage and death extensively analyzed. The information about the families of each of the passengers has been published in different publications and is constantly discussed and updated.

I decided to start with Richard Warren, Francis Cooke and his son, John Cooke and correct the information I gathered some years ago with current information and then work down the Warren/Taber/Brownell/Tefft line to Thankful Tefft. In essence, go at the issue from both directions, examining the evidence and citing the sources. This would help document the next Tanner connection, establishing the parents of Joshua Tanner and also clarify some of the other ancestors in that time period. Bear in mind that this establishes, for me, twelve generations. With this line well established and documented, I can then work on the rest of the ancestral lines, using the documentation to establish further connections. None of the immigrants to America in any of my lines arrived any later than the mid-1800s. So there is little, if any real controversy about the first six generations of my ancestry.

Well, with that introduction, I am off for another day of helping researchers and filling the time with my own.
Posted by James Tanner at 6:00 AM