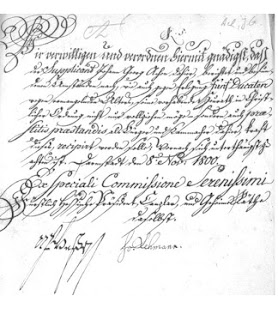 I received a note from Google+ that started me thinking again about cursive and that led to thoughts about old scripts and preservation. Michael Helmantoler post the above image and the following question:


This is an image from the FamilySearch Wiki of a Hessen Darmstadt Citizenship City Record written in the Old Gothic script in 1800. What is the effort that exists to preserve old German script type records through photo digitization, optical characte reading to make them surname and place name searchable for Family History uses?

The issue of whether or not software can be developed to read handwriting has long been under consideration. The greater issue of whether or not anyone will be left to read cursive writing in general has also received some attention, but both of these issues stem from the same historical process: languages change over time and so do the ways in which they have been preserved. My interest in languages led me to a Masters Degree in Linguistics. Although, I did not pursue a further formal degree, my interest has continued over the years and as part of that interest, I have read and studied about the translation of ancient scripts.

I am fully aware of the challenge of reading an unfamiliar script. But not only is there a problem with moving back in time, but some contemporary handwriting is so bad as to be undecipherable. For example, I can easily read 18th and 19th Century parish registers from Mexico and Spain, but have a great deal of difficulty deciphering the handwriting of some of my law partners.

Part of the impetus for developing computerized handwriting recognition processes comes from the need to process huge amounts of information, such as the mail sorting capabilities of the U.S. Post Office and other organizations. But there is currently a fundamental shift in the U.S. in this regard. Schools across the U.S. are abandoning the teaching of cursive handwriting. Many of my own grandchildren are not being taught cursive handwriting in school. I have written about this particular issue before, but there is a lot more to be said on the subject.

In a practical sense, the motivation for developing a computerized method of reading any type of handwriting depends on the commercial demand for such products. Reading old scripts has a very low priority simply due to lack of demand. If you would like an extensive introduction to the entire area of OCR here is a link to CVISION Technologies, Inc., a leading provider of file compression, recognition technology, PDF workflow applications, and document automation technology. CVISION has an extensive OCR Resource library and OCR Primer.

An interesting challenge of developing a computerized process for reading something such as the Old Gothic script is the availability of people who can read it. An even greater challenge than Old Gothic is Carolingian. Here is an example:

Of course, part of the issue is not the handwriting at all, but the old languages represented by the handwriting. It is one thing to try and decipher handwriting into modern English and quite another to try and understand Old Church Gothic or Latin. In some cases, the amount of text available severely limits the ability of modern human translators to understand the old scripts.

Yes, this is an interesting problem. You might be interested in some of the websites available to help genealogists learn old scripts, here is a place to start: Paleography - Deciphering Old Handwriting. Here is another link to a long list of resources.  Also, check out the resources available from Brigham Young University and the Script Tutorials from BYU.
Posted by James Tanner at 6:46 AM