The Ins and Outs of Evidence for Genealogists -- Part Four: A Firm Foundation 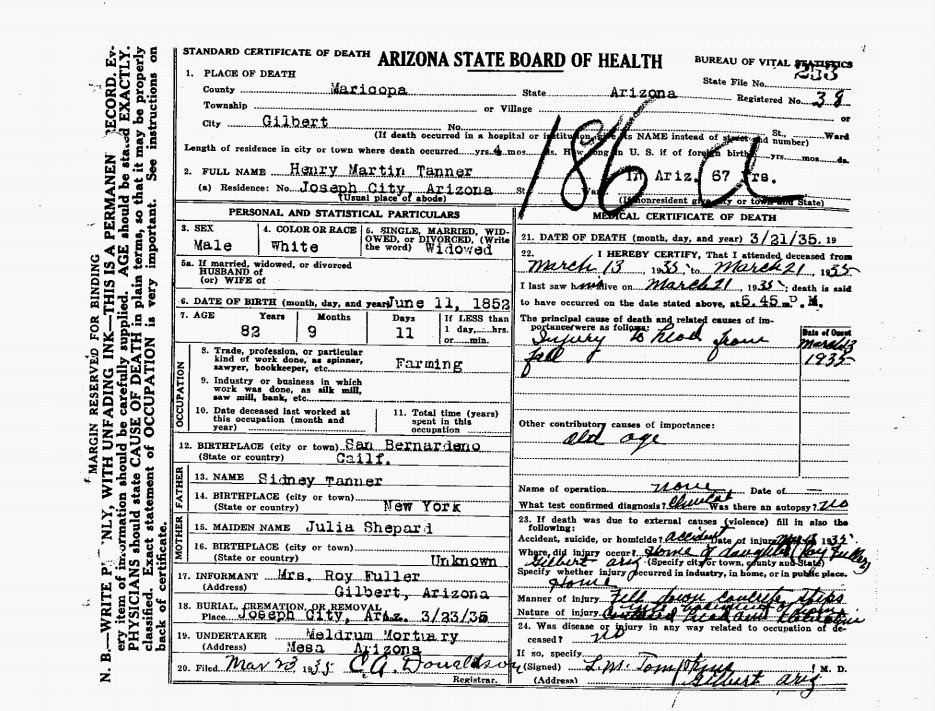 Me to the Witness: "I hand you what has been marked as Exihibit 1. Do you recognize this document?"
Witness: Yes, it is a death certificate and it says....
Opposing Counsel: "Objection your Honor, the document is not yet in evidence."
Judge: "Sustained."
Me to the Witness: "Please just answer the questions and do not comment on the document. When did you first see this document?
Witness: "I looked online on the Arizona Department of Health website and found it."
Me: "Your Honor, I would move into evidence Exhibit 1"
Opposing Counsel: "Objection your Honor. Lack of foundation."
Judge: "Sustained. Mr. Tanner, lay a little more foundation."
Me: "Yes, your Honor."

This type of interchange goes on thousands of times a day in courts all over the United States. This is the final step in a process that may have taken months or even years: that is, trial preparation. One of the most important parts of trial preparation is the discovery process where the attorneys try to accumulate enough potential evidence to prove their case in court. It is well understood by trial attorneys that merely discovering a document is not enough. That document, no matter how important it may seem to ultimately proving the case, it not evidence. In order to use any document in court, the attorney presenting the document for admission as evidence has to know how to "Lay a Foundation" for its admission by the court (judge). The same thing goes for oral testimony. Any testimony given by a witness has to have a proper foundation.

Laying a foundation is the process of establishing that the proposed testimony or the proffered document is relevant (a technical legal term) and admissible (also a technical legal term). Knowing how to do this is one of the most difficult skills acquired by a trial attorney. The exclusion of important testimony or a dispositive document may make or break a case. As is partially illustrated above, testimony about the contents of a document is not allowed until the document has been properly admitted into evidence and marked as an exhibit (normally, despite what you see in movies and on TV) all of the identifying, marking etc. is done before the trial. So the process could be outlined as follows:

First:
The attorney gathers documents and obtains testimony from potential witnesses. The testimony is obtained either by written affidavits or through "depositions." A deposition is similar to taking testimony in court but it is done outside of court before a court officer called a court reporter. The testimony is under oath and can be used at trial under some circumstances. Using a variety of legal procedures, the attorneys in the case participate in the "discovery process." This can take days, months or even years. The attorneys use depositions, interrogatories and other legal processes to obtain information about the case that is considered as potential evidence.

Second:
The attorney organizes and analyses this mass of information and selects those documents and the supporting testimony needed to prove the case.

Third:
The documents etc. are put into the proper format for trial, i.e. they are put in notebooks and copies made for the court and any other parties to the lawsuit.

Fourth:
The pile of documents is taken to the trial and marked by the court as "exhibits." Then each exhibit is presented to the court for admission, either before the trial as agreed by counsel or during the trial as illustrated above. Only those documents and only that testimony admitted by the court (judge) into evidence are considered as evidence in the case.

Although this is an extremely simplistic outline of the discovery and evidentiary processes, I hope it begins to illustrate the complexity of finally having a document or testimony considered to be evidence.

Contrast this with the ease and casual nature of acquiring so-called genealogical evidence. I do not want to minimize the effort genealogists make in finding information about their ancestors. In fact, this is the main activity of family history or genealogy: searching out documents and other records about their ancestors. But once they find a document, they do not have to go through the elaborate procedures outlined above, they merely have to attach the document to the individual or individuals in their file and start calling it evidence.

Why does our U.S. legal system impose such extensive restrictions on the use of documents and testimony in court cases? This whole complicated legal structure has been created so that the information that is finally considered by the judge or jury is as proper (admissible) as possible. The whole legal structure sometimes seems designed to simply make work for attorneys and their staff, but in the end, the process is designed to assure everyone involved that the trial has been fair and that the final evidence is as reliable as possible.

From watching movies and television, you would get the idea that law was some kind of game played to try and fool the court and/or jury into making a decision. This is really far from reality. After having participated in thousands of trials or other court actions, I can assure anyone who wants to know that ultimately, the entire process works very well. There are always individual instances where the goal of justice seems to be frustrated, but the only reason you hear about these cases is because they are so rare. The U.S. legal system is not designed to make people happy, it is designed to resolve controversies. I would guess that most of the time, my clients were not overly happy with the outcome, but the cases ended nonetheless.

Why am I taking this time to talk about the process of producing evidence at a trial? The main reason is to illustrate the extreme contrast with the rather simplistic attitude taken by genealogists when they claim to have evidence that "proves" this or that about their ancestors. The only thing the two processes have in common is the use of similar terms such as "evidence." If you "prove" a legal case, it means that the judge has agreed with your arguments and your client won. If you prove your genealogical conclusions, all that means is that you are convinced you are correct. From my perspective as a genealogist, we do not prove anything, we merely gather documents and make conclusions based on either those documents or our own prejudices. As I have mentioned before (and probably will again and again) historical investigation bears little or not resemblance to proving a case in court. The whole concept of laying a proper evidentiary foundation is lacking from the historical and hence, the genealogical process.

As a side note, the closest that historians and genealogists get to the concept of "laying a foundation for evidence" is the idea of provenance. This is a record of the ownership of something, such as a photograph to determine its authenticity or quality.

As I discussed in my last post on this subject, historians and genealogists can pick and choose what they consider to be "evidence." If they ignore some documents and emphasize others, no one will really know. In trial, if I ignore anything, the opposing attorney may jump on that fact immediately.

Simply using legal terminology does not make one into a lawyer and using those same legal terms in the context of historical or genealogical research does not prove anything or make the conclusions any more valid. The amazing thing about genealogy is that only a vanishingly small percentage of those involved in researching their ancestors even know that the so-called genealogical proof process even exists. Many genealogists are stuck at the same name = same person level. When I get into this discussion about proof and evidence in the context of genealogy, I am really only addressing a relatively small number of experienced and sophisticated genealogists and I am painfully aware that few of them agree with anything I am saying.

I realize you are probably wondering when I am going to talk about genealogical proof, but that is exactly what I am doing. This series will go on (and perhaps on and on) but ultimately, I hope to define the parameters of what is and what is not a proper genealogical conclusion.

Here are the previous installments: