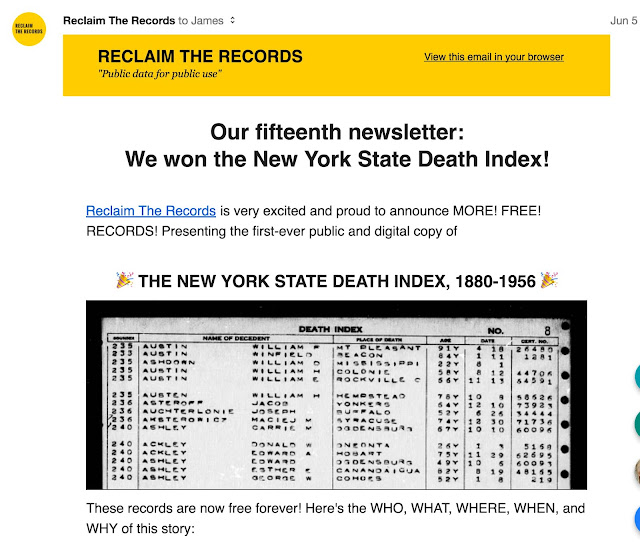 Quoting from a recent newsletter:


Reclaim The Records is a not-for-profit activist group of genealogists, historians, researchers, and journalists. We work to identify important genealogical record sets that are not online anywhere and not broadly available to the public. We then use state Freedom of Information laws to force government agencies and archives to hand over copies of these records to the public, which we then digitize and put online for free use. Other organizations and companies are then free to make transcriptions and searchable databases of our images and data, if they wish.

Since our founding in 2015, we've won the first-ever release of tens of millions of records, which we then upload to the Internet Archive, as well as other Open Data websites. When government agencies fail to respond to our requests in a timely manner or are unwilling to comply with the law, we take them to court. We've won settlements in two groundbreaking lawsuits in the Supreme Court of New York, winning the release of decades of the New York City marriage license index and database, and we even won the payment of our attorneys fees from the city in the second case. We currently have one lawsuit pending in Missouri, asking for the first-ever post-1910 birth index and post-1965 death index for that state. And we have more requests and potential lawsuits planned for other records from other states.

The latest victory for this organization is the freeing of the New York State Death Index from 1880 to 1956. The copies of the documents are now being posted on Archive.org The Internet Archive
Their website seems to be having a problem at the time I wrote this post, but their Facebook page is well and has the full explanation of their efforts to free the death records. See the following: