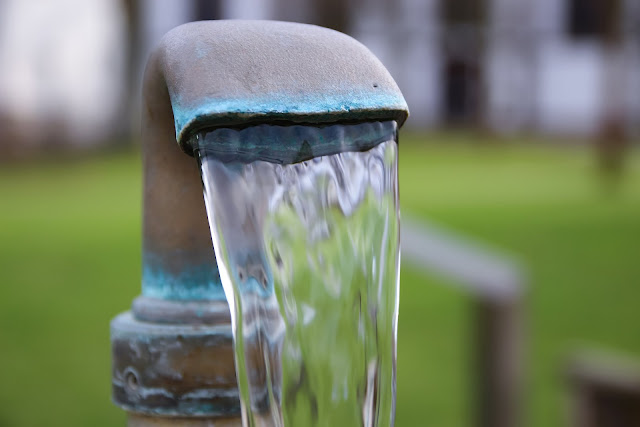 I am not sure there is such a word as "sourcecentric" but there should be. As genealogists, much of what we see that was written or collected in the 1800s or earlier and even into the 1900s about families and their history is a conglomeration of fact, fable and pure fiction. As a result, much of what passes for family history or genealogy in online family trees dating back to these time periods has been copied from these earlier publications. This is especially true in the United States and seems to be especially the case with my own set of ancestors.

For example, my "Tanner" surname would seem to be an obvious derivative of an occupation. However, its actual origin is more complicated. The name is common in England but also in Switzerland and other parts of Central Europe. The reason for this is speculation, but it may arise from Germanic place names. However, in the surname books about the Tanner family, there is a tendency to assume that anyone with that surname is somehow related. This idea that people with the same name are related is pervasive even today.

There is an old adage that nature abhors a vacuum. I would expand on that principle to say that genealogists abhor a blank pedigree space and they will try to fill that space with any name they can find that might fit. So any Tanner that is found, even in another country, "must" be related and can be used to fill in that blank space.

Unfortunately, this tendency is not limited to surnames. It is common to see people added to a family tree based solely on the fact that they have the same given names with a total disregard for the places and times when the added people lived. Name matching is the antithesis of a sourcecentric genealogy.

Another common tendency is to fill the blanks with a famous person or royalty. In fact, any name is better than a blank space.

Of course, part of my current preoccupation with this subject comes from working on the FamilySearch.org Family Tree. The accumulation of names in my own surname line, the Tanner family, has been primarily based on a surname book originally published in 1895 and then reissued in 1905. The book was later expanded in 1910 with a new title. The 1895 edition is not readily available. Here is the citation to the first book:

The 1910 edition is the edition most commonly cited. Notice that the first book was about William Tanner of North Kingstown. The first book only cursorily examines the genealogy of William Tanner, the original immigrant, but is primarily about a second William Tanner who is assumed to be his son. Here is the citation for the second book.

This 1910 book contains a detailed examination of the existing sources with extensive citations concerning the origin of the family in Rhode Island. Despite this availability of references to original documents, and the fact that the book is widely and routinely cited as the "source" for information, the records cited by the book have not been included or referenced in the information traditionally included in the Family Tree and other family trees in other online programs. Rather than examine and build upon the cited sources, later researchers have merely copied some of the information and randomly created other, unsupported information without sources.

The tendency to fill in the blank spaces in a family tree are so prevalent that anywhere an end of line appears, people will add in any name they can find that is even similar without regard for dates or places. Since the 1910 book is widely known and has been copied in a number of other books, information from the book is used routinely as if it were carved in stone. Unfortunately, only a short summary of the information in this earlier 1910 book was included in a later, more popular book.

The earlier 1905 book is widely available in digital format but seldom cited or used. The later 1910 book is extensive used and cited by those who attempt to maintain the "traditional" family line even though the information is incomplete and wrongly cited in the later 1942 book.  This is also despite the fact that both the original Tanner book from 1905 and later 1910 edition contains references to the existing records of the time. However, some of the conclusions made by George C. Tanner in both books do not agree with the documents to which he makes reference. As he says in his 1905 book in several places his conclusions are based on conjecture and supposition. The conclusions of 1910 book are more adequately sourced but he still admits many of his conclusions are conjecture.

Here is the problem. The information from the book, even the source citations, is generally miscited or ignored. When the author notes that he has no information and his conclusions are conjecture, he does so, but those who subsequently cite the book ignore the author's words and assume the information is correct without doing any additional research to validate the conclusions. It is this last step that is largely ignored and skipped when adding information to the Family Tree.
Posted by James Tanner at 9:35 AM