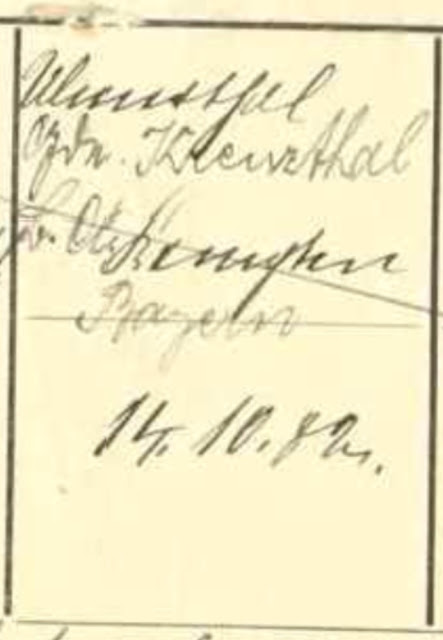 From time to time, I encounter some very difficult research issues. In the course of helping a friend with some of his German/Swiss ancestors, I ran across this record on his ancestor's German Military record. It was on a World War I Bavarian, Germany Personnel Roster and gives the place of birth of the ancestor. This is what that ancestor had recorded as a birthplace in the FamilySearch.org Family Tree:

Why was this important? As I have written many times, identifying the place where an event occurred is the key to finding records about the individual and the family. I began with a two prong approach; deciphering the handwriting and trying to locate the places mentioned on maps and in gazetteers. The place as it was recorded in the Family Tree, did not seem to exist. The real problem was that the place named on the military record did not seem to be the same as the place recorded on the Family Tree. They both referred to a place in "Bayern" or Bavaria, but nothing else seemed to match.

I suspected that the place named "Ulmerthal" was a farm name. There was a secondary problem in that the female ancestors involved seemed to retain their maiden names and for two generations the children had their mothers' maiden names. A little bit of research showed that this was a custom in some areas of Germany concerning "farm names." Here is a quote from the FamilySearch.org Research Wiki on German Names, Personal:

The development of alias surnames was often tied to agriculture. When a man moved to a new farm, he sometimes changed his name to the name of the farm. Also, when a man married a woman who had inherited a farm, his name may have changed to her family name. In this situation, some of the children born to the couple may have used his surname, while others in the same family used the wife's family name.

In this situation, I sought out one of the missionaries serving in the BYU Family History Library for help with place names. He began searching in the Meyers Gazetteer of the German Empire aka Erich Uetrecht. Meyers Orts- und Verkehrs-Lexikon des Deutschen Reichs. 5th Edition. Leipzig, Germany: Bibliographisches Institut, 1912-1913 and very quickly solved the apparent conflict between the place names.

As I suspected, the first place in the Military Record is deciphered as "Ulmerthal" a farm name, and that agrees with the name of the place as it is recorded in the Family Tree. Ulmerthal is near Kempton, which is the place recorded in the Military record. Kempton is also in Swabia, Bavaria. So, some of the places between the two different entries were in agreement. But the key here is that the entry in the Family Tree did not mention Kempton or Kreuzthal. After some more digging, the name of the place was sorted out.

The key here is that according to the Meyers Orts all of the records for this area would be found in Kempton. Now we get to another problem. FamilySearch.org and the other online document database programs do not have this as a place. Here is a satellite view of the farm. 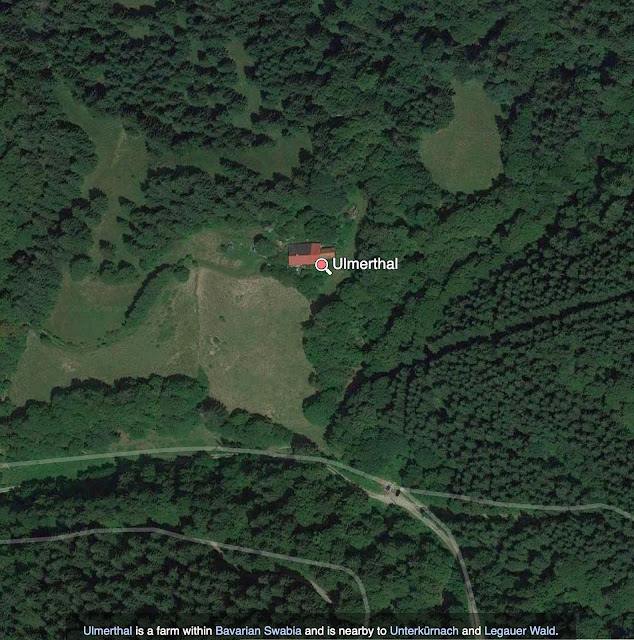 But the key still remains that the records are in Kempton which was not mentioned as the place was previously recorded in the Family Tree.