From Whence and to Thither -- Understanding Migration Patterns: Part Four

I am going to start to explain the concepts and history of migration patterns with one of most obvious influences in U. S. migration: the Erie Canal. The canals built in the United States opened up vast areas to settlement. The Erie Canal connected the population centers of New York City and Albany with Buffalo on the Great Lakes. Construction on the Erie Canal began in 1817 and the first sections were completed in 1819. Here is the timeline of completion dates for the Canal.

Here is a summary of the impact of the Canal from the FamilySearch.org Research Wiki:

The Erie Canal contributed to the wealth and importance of New York City, Buffalo, and New York State. It increased trade throughout the nation by opening eastern and overseas markets to Midwestern farm products and enabling migration to the West. New ethnic Irish communities formed in towns along the canal, as Irish immigrants were a large portion of labor force involved in its construction.

Some of my own ancestors may have used the Canal for transportation because they moved from New York State to Ohio during the time period when the Canal was in operation. The Canal opened a way for large quantities of goods and services to be moved across a significant part of the country where such movement was previously not possible. By connecting that pathway to the Great Lakes, an even larger area of the country was opened up.

Now, as a genealogist, what does this tell you about the possible movement of your Eastern Coast ancestors into Ohio and other states? Let's suppose that your ancestors show up in Ohio in the mid-1800s. Where might the family have come from? Here is a more extensive map of the Canals built between 1825 and 1860. 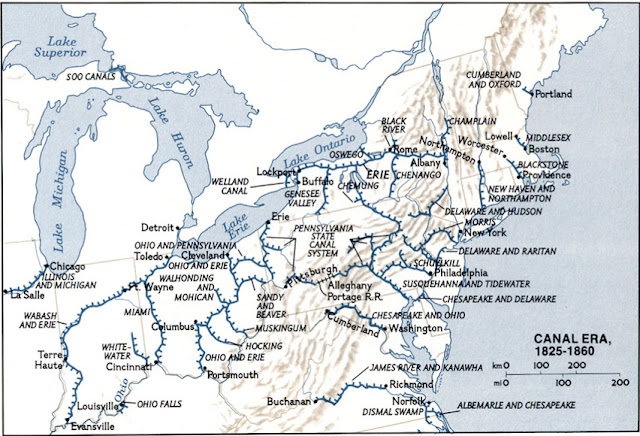 It might be interesting to see if the location where your ancestor lived gave them access to one or more of these canals. By looking at the dates the canals were constructed you can begin to see whether further research might reveal a pattern in your ancestors' movements that corresponds to the availability of canal travel. It also might help you to know that the present highways system follows the canal routes. Here is a Google map showing the roads from Albany to Buffalo that generally follow the route of the canal. As I mentioned previously, the major highways in the U.S. are a good indicator of the main historic migration routes.

If it is time to do some serious research, here is a list of books about migration patterns in America.


Hawley, George. Voting and Migration Patterns in the U.S, 2015.