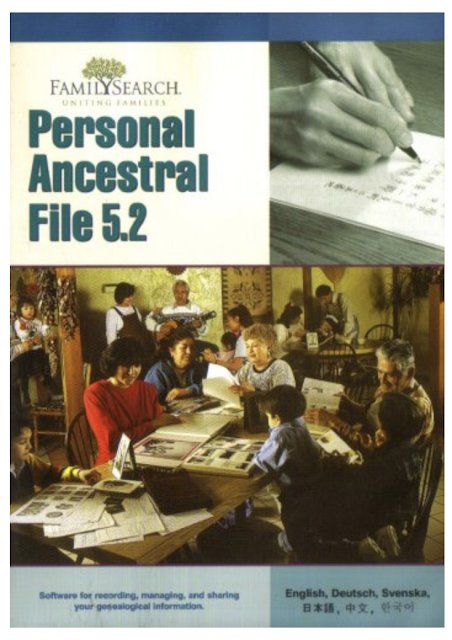 As Mad Max says, there is a big difference between being dead and being mostly dead. Apparently, Personal Ancestral File is only mostly dead. I had several people point out to me that Personal Ancestral File was still available at some Family History Centers, on websites, and on CDs for download. When I get time, I will download a copy, which I could not find on my first go around and write about using the program with Microsoft Windows 10 or whatever.

One thing I thought that was interesting is the fact that people indicated to me that the program was available on CD. Only some of the newer computers come with a CD drive by the way. None of the new Apple computers or devices now come with a CD or DVD drive. You might not have noticed, but that technology is also dying rapidly in competition from online streaming and flash drives. I do have a CD drive hooked up to my iMac, but I had to buy it separately. You might also try to load a program from a CD onto your tablet or iPad if you want to see what is really happening.

By the way, Apple is merging both their Mac OS X operating system and their iOS operating systems. Google is merging its mobile Android system with Chrome on its Chromebooks. Microsoft has so far failed to make any headway into the mobile operating system market. But Windows is still the dominant operating system worldwide for desktop and laptop computers. See "Operating System Market Share." But the huge mobile market is dominated by Google Android and Apple iOS. See for example, "Global mobile OS market share in sales to end users from 1st quarter 2009 to 2nd quarter 2017."

This is a situation where Microsoft is winning the battle but losing the war. The real war is in mobile computing. Both Apple and Google recognize this and that is one reason why they are moving to merge their operating systems. The issue with Personal Ancestral File is much more fundamental than merely whether or not it will operate on a Windows machine. The real issue is that future operating systems will not be Windows-like, they will be Android or iOS like. Can you run PAF on your iPad or tablet running Android? Try it.

Yes, you can probably pick up a copy of PAF in a Deseret Industries store around the U.S. But is that a viable outlet for the software you want to use to archive your days, months and years of genealogical research effort?

However, the PAF issue goes much deeper than just that one program. It is symptomatic of a deeper issue with genealogists and technology. I just recently spent almost an hour with two different people trying to retrieve their logins and passwords to FamilySearch.org. You can guess that both of these people are not young. You might not realize it if you are reading this blog post, but most of the younger people I know would not even realize that desktop computer programs for genealogy even exist, much less be interested in using a program that was discontinued before they were born.

For me, PAF is the genealogical symbol the digital divide; the outward and obvious indication that huge segment of the genealogical community as simply out of touch with technology. That is the main reason this subject comes up periodically and will continue to be a subject for comment until the program really dies.