All Burned Up: Fires and Genealogical Research 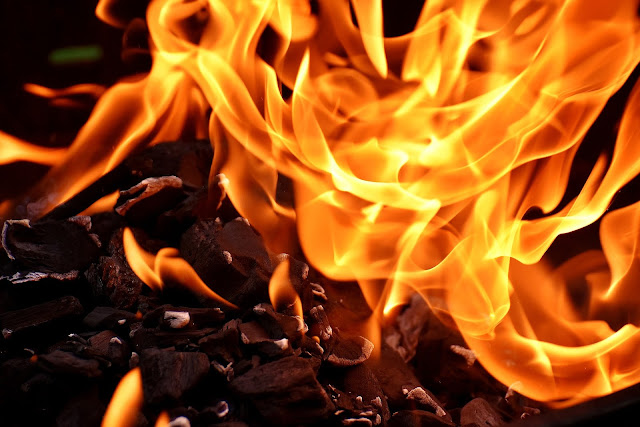 Because most of the world's genealogically significant records have been created and stored on paper or a paper-like substitute (parchment etc.) our collective history has always been subject to loss from a variety of natural causes. One of the most common is fire. There have been some notable documentary losses due to fire stretching back almost to prehistoric times. More recently, there have been several large fires that have had an impact on our ability to do genealogical research. I decided to list a few of the more prominent fires. But before I do the list, it is absolutely important to understand that although records are lost in a fire, that does not mean that every record about our ancestors was lost. Loss from fires may make a research objective more difficult but rarely impossible.

Here are a few of the fires.

It is commonly repeated that the 1890 U.S. Federal Census was lost in a fire. That is only partially true. The entire story about the loss of the 1890 Census is more complicated. The U.S. National Archives has a three-part series outlining the real story. You can read the series starting with Part One, "The Fate of the 1890 Population Census, Part 1." You will discover that the census was lost through bureaucratic incompetence in addition to some fire damage.

No duplicate copies of these records were ever maintained, nor were microfilm copies produced. Neither were any indexes created prior to the fire. In addition, millions of documents had been lent to the Department of Veterans Affairs before the fire occurred. Therefore, a complete listing of the records that were lost is not available. However, in the years following the fire, the NPRC collected numerous series of records (referred to as Auxiliary Records) that are used to reconstruct basic service information.

The fire was in the St. Louis, Missouri NPRC Military Building.

Claiming that the records were lost in the Chicago Fire is almost a universal genealogical excuse for not doing more research. I have found people using this as an excuse even when they did not know for sure that their ancestors or their ancestors' records were in Chicago in 1871. However, the real loss was catastrophic. Here is one place to start reading about the loss of records;

greatchicagofire.org The Losses by the Fire.

4. The Irish Public Records Office Explosion and Fire of 1922

With this fire, it is a good idea to start out with some online research. Here is a good article from the Irish-Genealogy-Toolkit.com website: "All Irish genealogical records were destroyed in the 1922 fire': Myth or fact?"

Irish research is difficult enough, but the loss of the Public Record Office (PRO) records makes the task even more difficult. Here is a summary of lost records from the above article.


The PRO housed many genealogical treasures including Irish census returns, originals wills dating to the 16th century, and more than 1,000 Church of Ireland parish registers filled with baptism, marriage and burial records.

The suggestions contained in this article apply to all of your research in all parts of the world.

Another common excuse for discontinuing genealogical research is the claim that all the records were burned in a courthouse fire. This loss of records is generally referred to as "Burned Counties Research." A good place to start is with the FamilySearch.org Research Wiki article on Burned Counties. There is a chart showing a partial list of the burned counties and an explanation of the steps needed to overcome some of the loss. There is a more complete explanation about burned counties research in the following book written by Holly T. Hansen, Arlene H. Eakle, Ph.D and me.

The book is available on Amazon.com.

If you believe that some records have been lost to a courthouse fire, do your research and find out exactly when and what was lost.

6. San Francisco Earthquake and Fire of 1906

I have to admit that I have not had many people claim their records were lost in the 1906 San Francisco earthquake, but it is possible I suppose. This in no way is intended to minimize the huge destruction that occurred, but in some cases, the post-earthquake claims and other records are valuable for research.

With this note, I am probably getting beyond the commonly referred to fires. Quoting from the New York Genealogical Biographical Society website article entitled, "Fire at the New York State Library,"


In 1911, a fire in New York's State Capitol, Albany, destroyed an enormous amount of crucial historical and genealogical records. Read on to learn about the fire, see some of the astounding pictures, and learn about what was destroyed. We'll also detail two heroes of the fire, who saved countless precious historical resources from destruction in the days after.

Harry Macy Jr. wrote about this event and its impact on New York genealogy in the Spring 1999 issue of the NYG&B Newsletter (later renamed the New York Researcher) - this blog is based on that article, The 1911 State Library Fire And Its Effect On New York Genealogy, which is available for NYG&B members to read in the New York Knowledge Base.

This quote illustrates the fact that complete research in any given area may include joining a local or state genealogical society.

Well that is enough of my list for now. I suggest that if you suspect a fire, look for the smoke. In other words, take the time to do your research about the real effects of the fire before giving up on your research.
Posted by James Tanner at 6:27 AM