What's Wrong with these Dates? 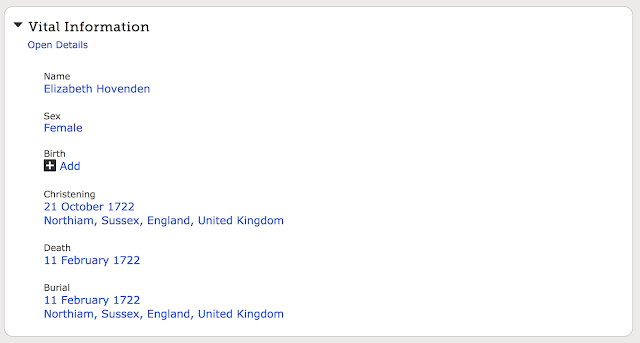 These dates come directly out of the Northiam Parish Register and they are correct. So how is that possible? If you are a very experienced genealogist with a lot of time doing English research, you may know the answer immediately. But if not, you may have to spend some time doing some historical research before you can resolve what seems to be conflicting dates.

The answer turns out to be both simple and complicated. Before 1752 in England and most of its colonies, the New Year was on March 25th. Here is the explanation from The Connecticut State Library, Colonial Records and Topics article, "The 1752 Calendar Change."

England's calendar change included three major components. The Julian Calendar was replaced by the Gregorian Calendar, changing the formula for calculating leap years. The beginning of the legal new year was moved from March 25 to January 1. Finally, 11 days were dropped from the month of September 1752.

Learning about the calendar changes will help explain many other seemingly difficult dating issues.
Posted by James Tanner at 12:17 PM