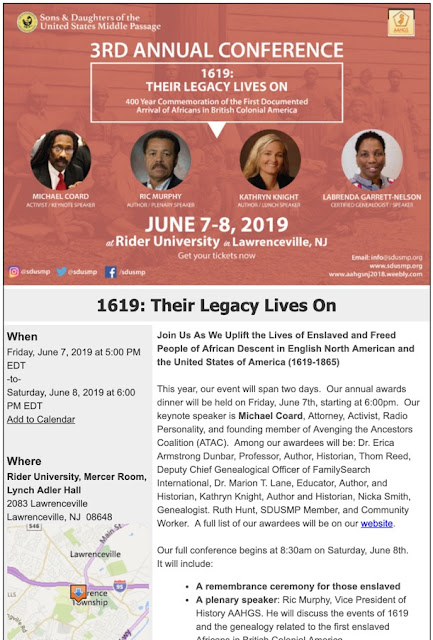 You are cordially invited to the 3rd Annual Conference of the Sons and Daughters of the United States Middle Passage. The theme of the Conference is 1619: Their Legacy Live On; the 400-year Commemoration of the First Documented Arrival of Africans in British Colonial America. The Conference will be held at Rider University in Lawrenceville, New Jersey on June 7-8, 2019. The full conference with Dinner is $95.00 with a discount for members. Click on the link above to the website for further information.


The Middle Passage was the stage of the triangular trade in which millions of people from Africa were shipped to the New World as part of the Atlantic slave trade. “The triangular trade system was so named because of the route it took.  The ships embarked from European ports, and stopped in Africa to gather captives.  After this, they set out for the “New World” (North America, South America, and the Caribbean) to deliver their kidnapped victims, and then returned to the point of origin. The transport conditions were horrendous and millions of enslaved people died on these voyages.

Sons and Daughters of the United States Middle Passage (SDUSMP) is a lineage society dedicated to the memory of our freed and enslaved ancestors and to the education and historic preservation of the artifacts and landmarks of slavery in the United States of America and its economic, psychological, and cultural impact on today’s society. Lest we forget.  SDUSMP is a non-profit, charitable 501(c)3 organization.