Was Your Ancestor Written out of History 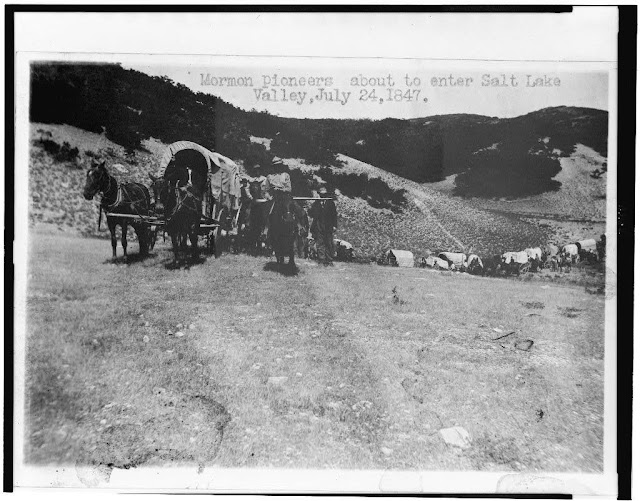 This post is about history and genealogy.  But before I begin, I have to note that the photo above is misleading and historically inaccurate. It is apparently a reenactment of the original event. There were no photographers waiting on the trail to take photos of the arriving pioneers. Although the arrival of the pioneers, members of The Church of Jesus Christ of Latter-day Saints, in the Salt Lake Valley in what is now Utah, is celebrated as a state holiday in Utah on July 24th, the first scouts for the wagon train arrived on July 21st and the main wagon train arrived on July 22, the leader of the Church, Brigham Young, arrived on July 24th. So we have a traditional account, a "corrected" historical account and yes, another real account researched long after the event.

Here is a quote from a "traditional" account of the arrival from an article in the Salt Lake Tribune entitled, "This is the place for facts you might not know about Mormon pioneers," I might point out that the Salt Lake Tribune newspaper has historically been antagonistic and critical of The Church of Jesus Christ of Latter-day Saints.


Who were the first Mormon pioneers to enter the Salt Lake Valley and was it on July 24?

Paul Reeve, University of Utah • Orson Pratt and Erastus Snow, scouts for the first group, arrived July 21. The first Mormon pioneers followed, on July 22, camping in the area of present day 1700 South and 500 East. The next day, they moved north and began plowing and planting. Brigham Young arrived July 24. His declaration that day was apparently a confirmation of a decision already made.

I also need to point out that the rest of the Tribune's article has some misstatements and some facts that are inaccurate or at best incomplete.

In the case of any historical accounts of the activities of The Church of Jesus Christ of Latter-day Saints, there is no question that you have to quickly begin separating fact from intentionally contrived fiction. There is a whole catalog of "anti-Mormon" writings that are simply fabricated. These early fabrications and accusations began circulating even before the Church was established in 1830 and are still being published and circulated today by those who would attack the Church for a variety of reasons. So why did I raise the issue of the historicity of the arrival of the pioneers? Simple, it is because some of the original pioneers to arrive have been mostly written out of history.

As genealogists, we may find a "brick wall" in trying to extend a pedigree line. We often wonder why there are no records of certain individuals when so many people surrounding them seem to be well documented. One possible answer is that succeeding generations of their relatives or detractors have simply written them out of history. One example of this is pertinent to the arrival of the pioneers. Here is a quote from an article co-authored by my daughter, Amy Tanner Thiriot, and Jonathan A. Stapley, entitled, "In My Father's House Are Many Mansions, Green Flake's Legacy of Faith."


When the first company of Saints left for the Rocky Mountains, three convert families from Mississippi sent their slaves ahead with the vanguard pioneer company. The slaves, Green Flake, Oscar Crosby, and Hark Lay (later Wales), were to prepare homes for the families at their destination.

The article goes on to state the following


Although references company members made to the black men traveling with them were not particularly enlightened, the men were a vital part of the pioneer trek. When Brigham Young lay ill at the head of Emigration Canyon, he sent Green and others ahead to prepare the road. Green drove the first wagon into Emigration Canyon, and when Young arrived in the valley, Green had already planted crops. When James and Agnes Flake arrived in the Salt Lake Valley in October 1848, they found that Green had built them a comfortable log cabin in the South Cottonwood area of the Salt Lake Valley.

History and genealogy are replete with such examples. There are examples of pedigrees where some of the pertinent facts are intentionally omitted or changed because of the personal prejudices of the genealogist or historian. There are also pedigrees that are completely fabricated. In the case of the three black pioneers, their history was "conveniently" forgotten until recently. See "Story of Former Slave, Utah Settler Forgotten No More."

When you are copying previous historians' and genealogists' work, remember that even seemingly well-documented history or genealogy may be tainted by prejudice, hatred, or simple incompetence.

For additional information about Green Flake, Oscar Crosby, and Hark Lay (later Wales) see the following articles but bear in mind that not everything you might read is factual and unbiased.