Expanded Commentary on the Rules of Genealogy: Rule Twelve 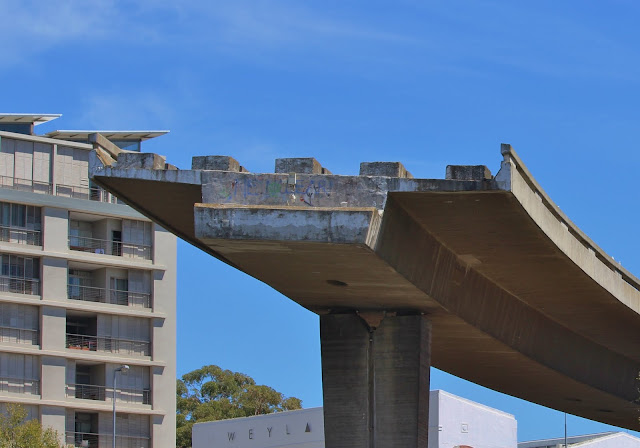 I have slowly been going back to the list of the Rules of Genealogy and writing about each individual rule. There are presently 12 Rules. Here is the current list from my blog post of 19 July 2019.

In this post, I am expanding on Rule Twelve: The end is always there.

I had an interesting telephone call about the FamilySearch.org Family Tree. Someone had found a line that apparently went back more than a thousand years into the dim historical past and wanted to know if the line could be accurate. I indicated that my experience was that these lines ended with the last entry accurately supported by a source citation to an identifiable historic record. Rule Twelve is really the simplest rule of all of the rules in the list above. It would also seem to contradict Rule Four but these two rules are really talking about different aspects of what we call genealogical research. Rule Twelve addresses the historical reality that any particular family line will always come to a point where the existing records are either no longer available or no longer accurate. Rule Four is focused on the fact that no one individual can possibly find or search all the records available for all of his or her family lines.

The earliest written records date from about 3000 BCE (Before the Common Era). But records about nearly all the families from Europe end in about 900 AD. These are the real, very practical ends of genealogical, source-supported research. Ancestral lines going further back in time cannot be accurately connected to anyone living today. But Rule Twelve addresses a more recent end to all current ancestral lines: they all end at some point and further research is certainly a waste of time and effort. The trick is knowing when that point has been reached.

As I have written and taught on numerous occasions, after examining thousands of ancestral lines for thousands of people, I have yet to find one that does not end. In every such case, the source records simply run out. Here is an example from the FamilySearch.org Family Tree. 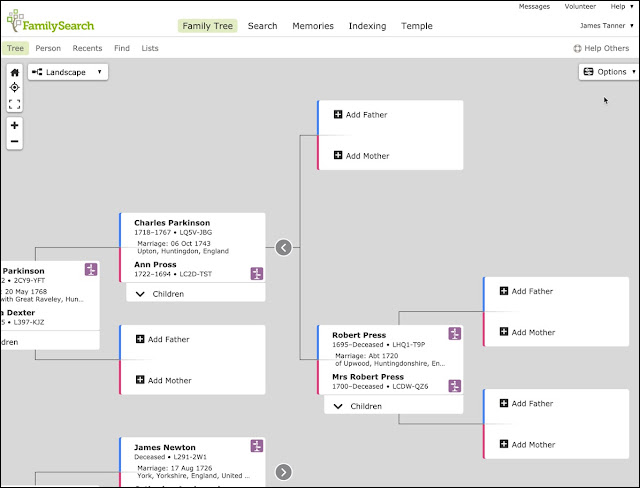 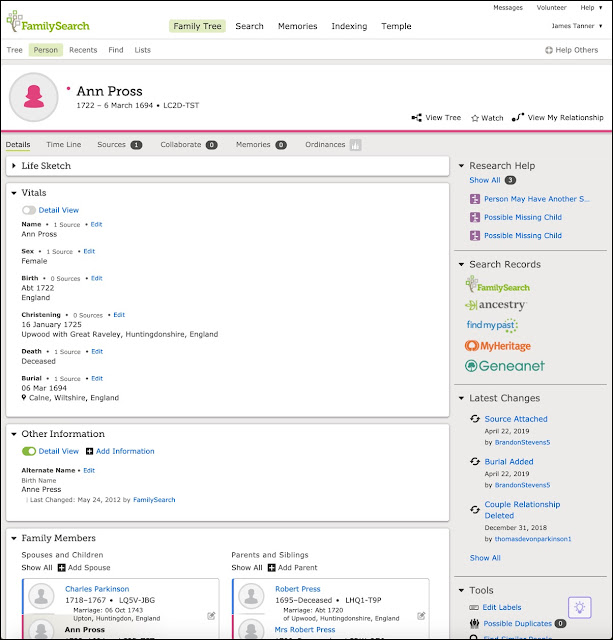 Despite this obviously wrong information, her parents are listed as Robert Press born in 1695, one year after his daughter was born and his wife, Mrs. Robert Press, born in 1700, six years after her daughter died. However, Ann Pross is listed with one source which is not a birth record, but a death record. This also means that she died before her husband was born and before any of her children were born.  Of course, there are no sources listed for either of her parents.

This line actually ends with William Parkinson, one of the listed children, who was born in about 1744 although there is no birth record for him. There are three sources: a marriage record and two burial records.

This is what is meant by Rule Twelve. The end is always there and I might add if you look and use some common good sense.
Posted by James Tanner at 9:26 AM