How to take better photos for genealogy: Part Three: Composition

The above photo was staged and was taken by a professional photographer. I could crop the image to improve the composition. 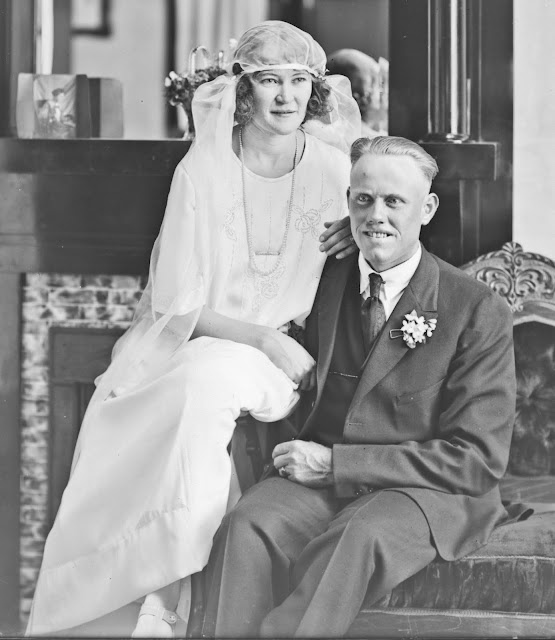 This automatically makes a better image but from a genealogical standpoint, much of the context of the original photo is lost or compromised. In the original, there were some things on the mantel of the fireplace. The knickknacks on the mantel can be dated to give a more complete picture of the environment of the couple. In some cases, an image could show a house, a car, or other recognizable items that could help identify the people and date the image. Here, since we know the wedding date of my grandparents, the other items shown in the complete image are still an important part of the history of the event.

You might notice that there is another photo within the photo above. Here is the photo on the mantel.

Once again, we have a great composition and you have to notice her dress and the design of the chair. If you were going to take this photo with a studio background, you might want to crop it like this:

Back in the days of film photography using large plates, the person developing the image could crop, rotate, and edit the image in a variety of ways. Now, with digital images, we have an almost unlimited ability to change the image with a few keystrokes. This image, for example, could be enhanced like this:

Of course, you should never make changes to the original photo. All changes should be done to a copy of the original. There is a significant controversy among genealogists about the propriety of the "restoration" and manipulation of historic photos. This photo has few challenges and the changes I made to the original are minimal but a restored photo is not the original especially if there was significant damage that needed to be "repaired." The argument goes that we are making a more acceptable or more satisfying image and therefore that consideration outweighs the issue of historicity. I can go along with this line of thought so long as the original image, no matter how damaged, is preserved and acknowledged as the original. For example, people have a tendency to remove scars, especially those that disfigure the individual from smallpox or some other disease. The person with the scarring would have lived with that so we are going to make sure his or her posterity do not know about that suffering?

Now, if you are taking a photo, you might intentionally include some background or objects that give the time and location of the photo. You might also think about moving in a step or out a step (careful not to trip) to get a better or tighter composition. You might also remember the purpose for the photo in the first place assuming you have one. Photos like the one above are equal to any work of art in any museum in the world if they are photos of your family.

To see some of my images go to Walking Arizona or https://walkingarizona.blogspot.com/
Posted by James Tanner at 5:03 PM