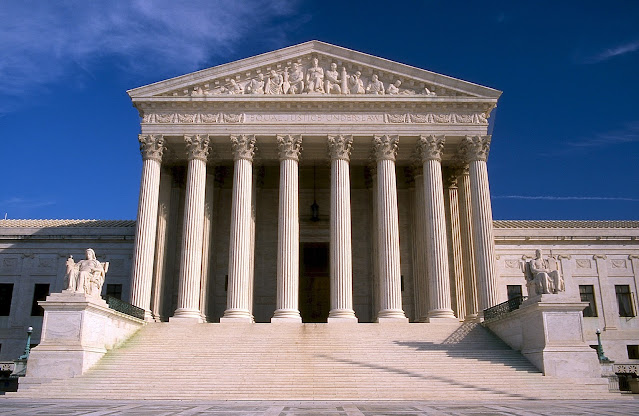 This post continues a series about analyzing genealogical sources.
Genealogists love to throw around the idea of proof. I would ask, can you prove anything? Here is a U.S. Army Enlistment Record. What does this document prove? 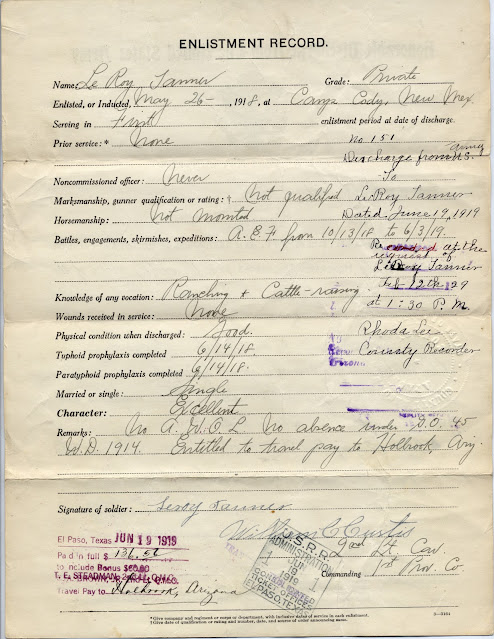 Despite the fact that this document is called an "Enlistment Record," it is really a discharge document. This document was also recorded in the office of the Apache County Recorder in St. Johns, Arizona (the county seat) on February 12, 1929. My Grandfather LeRoy Tanner served in the Army from October 13, 1918, to June 3, 1919. World War I ended on November 11, 1918. He served in the American Expeditionary Forces.
When I was younger, we had LeRoy's old Army Uniform. I knew he served during WW I and imagined that he fought in Europe. When I first started doing research about him, I found that his unit had fought in Europe. But my grandfather never fought in the War. He served for one month before the war ended. He would not have had time to travel from New Mexico, where he enlisted, to Europe. He was also 23 years old when he enlisted. He did not qualify as a gunner.
What does this document "prove?"
This question implies that there is some issue that is in dispute. His enlistment was never in dispute. No one questions the accuracy of the details of this document. There are no other documents out there that differ or contradict the information supplied in this document. The document certainly doesn't prove anything because there is no one disputing the information.
If you think of proof in a legal context, this document could be used in court cast as evidence. From my knowledge of the Rules of Evidence this document would be admissible in court for some purposes. But again, absent such a dispute, the document simply contains information that may or may not be true or accurate. Is the information genealogically valuable? Of course. Will the document help answer questions I might have about my Grandfather?
Here is the definition of mathematical proof: A mathematical proof is an inferential argument for a mathematical statement, showing that the stated assumptions logically guarantee the conclusion. This type of "proof" is more applicable to historical documents than the use of legal terms and assuming that when you make your own conclusion that you have "proved" anything at all. By the way, note that a mathematical proof is based on the Rules of Logic more accurately called the Basic laws of Propositional Logic or First Order Predicate Logic.
I would rather borrow a couple of terms from math and say that when people talk about historical or genealogical proof they are really saying that they have some arguments (statements) and that they have drawn their own conclusions and I may or may not agree.
What if I don't agree? Well, you could hire an attorney and file a lawsuit and take me to court to prove to me you are correct. But my experience in court has shown me that a lawsuit will cost you a lot of money and you have absolutely no assurance that you will prove your case and win.
So you may wish to think more than twice the next time you claim that your opinion proves some historical conclusion.
What am I really saying? I am saying that historical records provide us with information. We can then form opinions about events that occurred in the past. Those opinions are dependent on the documents we personally review and analyze. The next document may change our opinion of what happened, just like the about enlistment record did for me about my Grandfather's involvement in World War I.
For the previous parts of this series see the following: