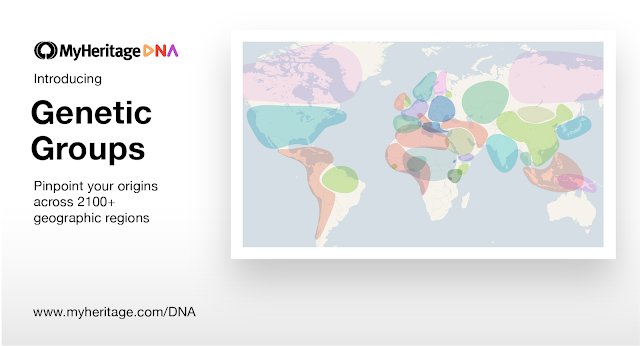 One of the most obvious advancements that increases the value and usability of DNA testing is the availability of a support system that helps the genealogical researcher identify specific ancestral connections. Most of the large, online DNA testing companies give their users some sort of Ethnicity Estimate. For serious researchers, these "estimates" are vague and not overly useful. However, MyHeritage.com has begun to break through the barrier of vagueness and provide some thought-provoking information.

MyHeritage recently announced a dramatic increase in the focus of its DNA testing with a huge number of ethnicity groups.

MyHeritage.com
Adding this number of new fields or groups increases the ability of a researcher to actually use the information for suggesting areas of research. In my own DNA testing results, the newly added Ethnicity Groups raise some interesting challenges. Here is my current estimate. 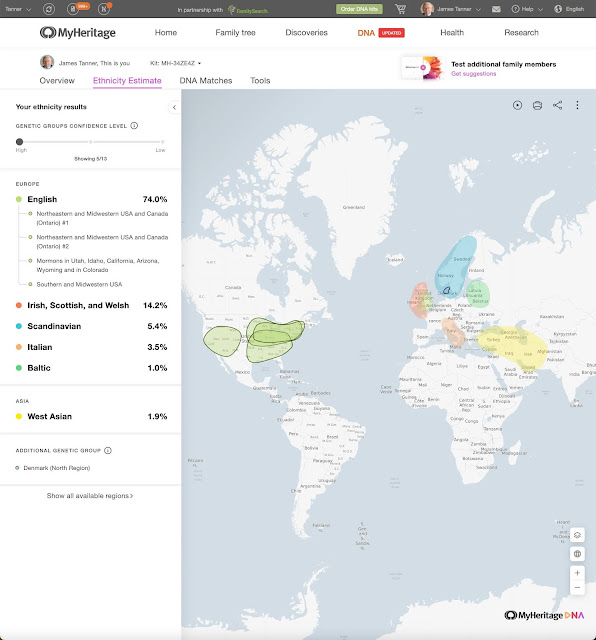 The English, Irish, Scottish, and Welsh connections are obvious to me. What is still a mystery is the connections to Italian and Baltic. Interestingly, I do have a theory about the small West Asian connection. I am certain that over time, these estimates will become even further focused and maybe those outlier connections will be resolved.
Here is a quote from a recent MyHeritage press release about the new groups.

TEL AVIV, Israel & LEHI, Utah--(BUSINESS WIRE)--MyHeritage, the leading global service for discovering your past and empowering your future, announced today the release of Genetic Groups. A major enhancement to MyHeritage DNA’s ethnicity estimates, Genetic Groups accurately identify ancestral origins with an incredibly high resolution of 2100 geographic regions, more than any other DNA test on the market. As of today, Genetic Groups form a key part of MyHeritage DNA test results and are included free of charge for all new and existing MyHeritage DNA customers.

Genetic Groups provide greater granularity than standard ethnicity breakdowns by segmenting larger ethnic groups, such as Scandinavians, into smaller groups that share a common historical background. Populations that lived together for centuries, originating in the same small locations or migrating together to new lands, often formed unique genetic signatures. The MyHeritage DNA test detects these signatures among people who descend from these groups.

For example, beyond learning that they have Scandinavian origins, a user can now find out that they are Danish. Not only that, but they may now learn where exactly in Denmark their ancestors came from, including locations such as the Faroe Islands or Western Greenland; or, they may find that their ancestors were Danish settlers in Minnesota. These are just a few of the 187 Genetic Groups that MyHeritage detects from Scandinavia, and the 54 Genetic Groups from neighboring Finland.

Here is an important statement about the nature of the new groups.

Membership in a Genetic Group is binary; an individual is either a member, or they are not, and in contrast to ethnicities, the groups do not come with percentages. Instead, MyHeritage assigns each Genetic Group a confidence level that is based on the number of DNA segments a person has in common with those that define a specific group. This confidence level reflects the quality and quantity of DNA segments that a person shares with the genetic data that represents each group.

The Genetic Groups feature includes detailed genealogical insights about each group. Users can view a group's migration patterns and drill down to view its precise whereabouts during different time periods from the 17th century until today. For each Genetic Group, users can view common ancestral surnames and common given names, the most prevalent ethnicities among the group's members, a list of other groups that have high affinity to the current one, and more.

This is a major step for DNA testing and moves these tools from the area of telling you what you already know into the realm of what you did not know previously.