You Can Read Handwritten Documents! -- Looking at the 1910 US Census Post #7

Note: This is not really a series although reading all the posts on this topic is useful. If you want to find additional topics, do a Google search for the first part of the post name and add the term "Genealogy's Star, like this "you can read handwritten documents! genealogy's star"]
You will probably immediately notice that the handwriting on this example page of the 1910 U.S. Federal Census is lighter than usual. As we go back in time, writing technology begins to change. You might be surprised to realize that the roller-ball or ball-point pen came into use around 1963. Many types of fountain pens were invented in the 19th Century and in 1910 there was an assortment of fountain pens available. However, the type of ink used by the enumerators, and the quality of the ink was always an issue.
There are quite a few issues with the handwriting on this particular page of the census. Most of these issues are individual to the enumerator. In short, the handwriting is not very good. However, with some practice and using the examples and names from other census records, you can make out the names without too much difficulty. Here is an example of some of the issues. 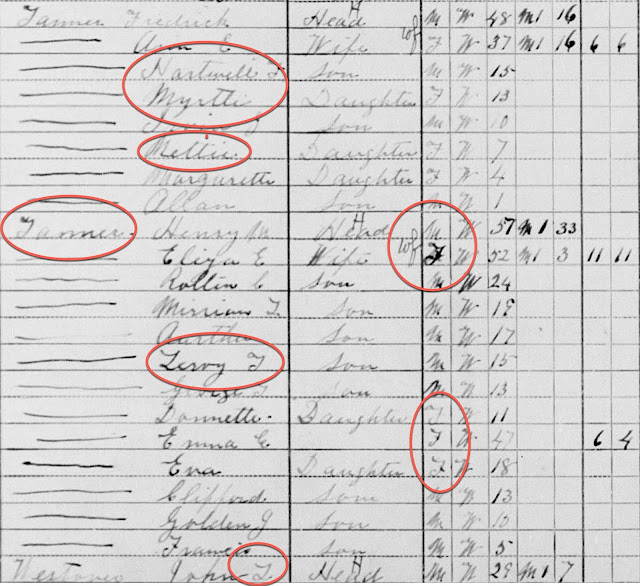 Starting at the top of the image, you can see the name "Hartwell." The cross stroke of the "t" and the extraneous dot are followed by a letter that looks the same as the "T" for Tanner. The name of the son is "Hartwell Frederick." The next name down is "Myrtle" although the dot over the "e" looks like it is an "i" and the cross stroke for the "t" makes the name appear to be "Myrtti." Again, if you compare the name to the entries on other years, it is clear that her name was "Myrtle."
Moving down, is the name "Nettie" or "Nellie?" If we did not have the advantage of comparing the name to other records, we might also choose to see the "N" as an "M." In this case, her name was "Nell."
If you are looking at this census record and already know the names of the family members, the whole problem disappears. On the other hand, if this is the first time you have seen these names, the next entry down on the list will give quite a bit of trouble. The name is "Tanner." In the past, my last name has been read to be "Tamer," "Turner," and "Fanner." If you look down to the gender examples, you can see that the enumerator writes his "T" the same as an "F" Sometimes the cross-stroke of the F is missing.
The next entry down is for "Leroy Parkinson Tanner." The letter is written exactly the same as the "T" and "F." Right at the bottom of the page, there is another example of a letter. Is it a "T," an "F," or some other letter? It turns out that it is actually an "L." The person's name is "John Lycurgus Westover."
If you are wondering why there are mistakes made in indexing, all you really need to do is look at a few pages of handwriting like this one to see the problem.
One of the first things you need to do to overcome this type of problem is to expand your research efforts to additional documents including reviewing all of the census records for all of the years they are available for this time and place. Another good place to go during this time period is to the newspapers. Here is a clip from The Holbrook News (Holbrook, Arizona) from 30 March 1917 that confirms reading the letter as an "L." 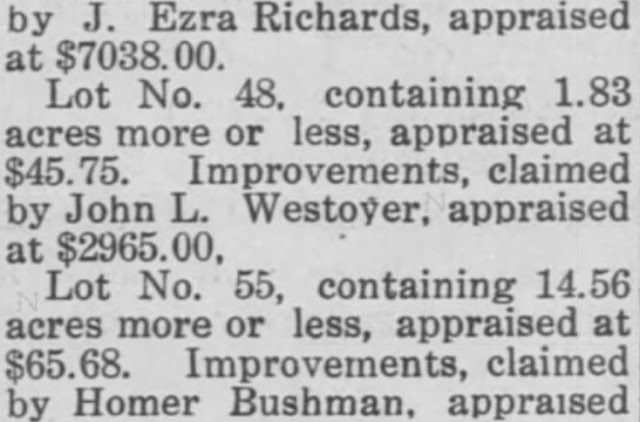 As I go back in time, giving examples, finding additional examples of the people's names becomes more and more difficult. I will take another step back in time in the next post on this subject.