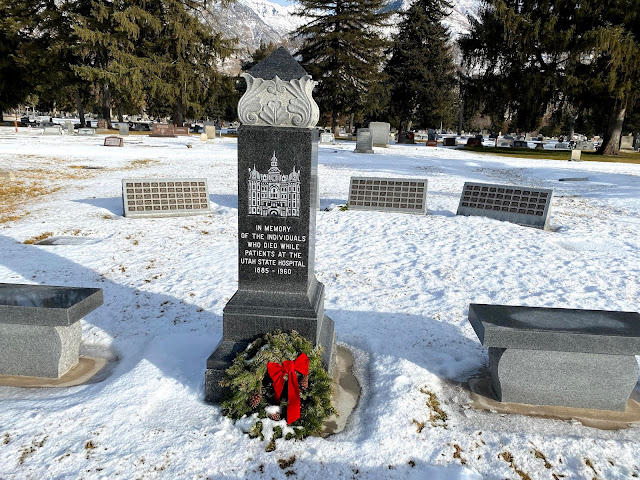 This grave marker ought to be an object lesson for all genealogical researchers. The Utah State Hospital Forgotten Patients Cemetery Project website states the following:

More than 500 patients died at Utah Territorial Insane Asylum, now Utah State Hospital, between 1885-1960, most buried in unmarked graves in Provo City Cemetery. A monument was completed 10 Oct 2018 to finally honor each of these precious spirits.

The website contains a list of those who are buried in the Provo City Cemetery. What is the lesson? When someone disappears from the obvious records and no burial record can be found, the person may have been lost in a multitude of different ways. This happens to be one of the saddest ways to die. Here is the reverse side of the marker. 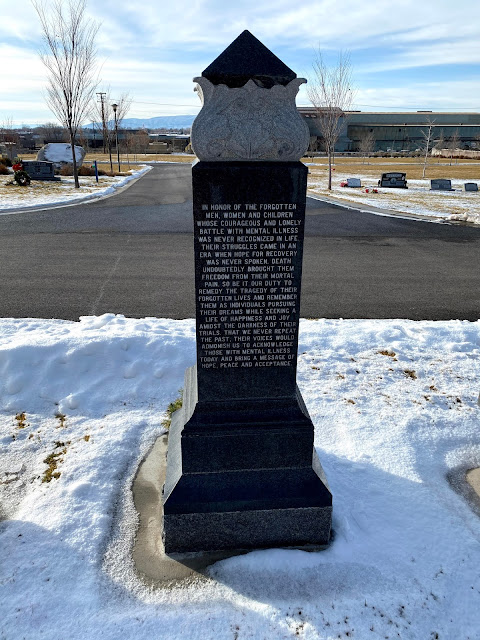 Many of the people memorialized by this project were born in the 1800s when the treatment for mental illness was even more rudimentary than it is now. Here is a short quote from the Utah Department of Human Services about the history of the Utah State Hospital.

The Utah State Hospital began as the Territorial Insane Asylum in 1885 at Provo, Utah (which at the time was a days’ travel from Salt Lake City). The particular site in Provo was some eight blocks from the nearest residence and was separated from the city by swampland and the city dump. The message this reveals about the prevailing attitudes regarding mental illness is unmistakable.

The intervening years, however, have brought many changes: the swamp has been drained, the dump converted into a municipal park, and the city has expanded to the point that there is no longer a stark demarcation of where the “Asylum” begins.

From its origin, the purpose of the Hospital was to treat the mentally ill and to return them to a normal level of functioning. In spite of their best efforts, however, in its early days, the facility was little more than a human warehouse. In fact, by 1955 the population at the hospital was over 1,500 patients.

Over the years, tremendous advances in psychiatric medicine have changed the role of the Hospital to one of very active (and successful) treatment and rehabilitation.

Today, it is truly a Hospital in every sense of the word.

Since 1986 the Hospital has received full accreditation from the Joint Commission on Accreditation of Healthcare Organizations, certifying the high quality of the Hospital's environment and treatment programs.

The Utah State Hospital operates under the direction of the Utah Department of Human Services, Division of Substance Abuse and Mental Health.

Remember Rule Four of the Rules of Genealogy: Rule Four: There are always more records.