One of the features of New.FamilySearch.org appears as an asterisk symbol to the left of entries for certain families. Perhaps there needs to be some additional explanation of this symbol because the consequences of having an ancestral line with asterisks is pretty complicated. Here is a screen shot showing several asterisk symbols with arrows pointing to each one: 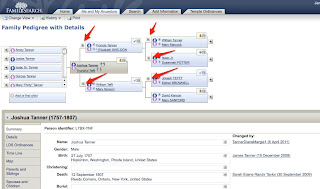 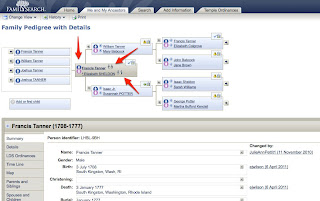 However, note that there are icons that look like two people with a box containing a plus sign after both Francis Tanner and his wife that were not apparent in the previous screen shot. According to the Help Center, the official description of the asterisk (*) is, "The individual has other parents. Click this icon to see them." Unfortunately, that is not quite all of the issue raised. 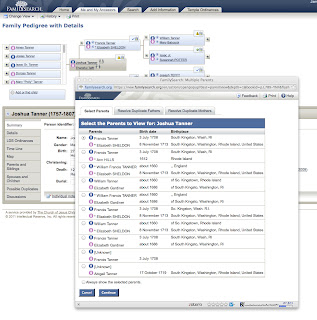 But remember what I said about the individuals. In fact, each of those "alternative" parents leads to a completely separate pedigree. So choosing which one to select is not a simple matter of making a guess at which one looks the nicest, but it requires you to evaluate the entire pedigree to see if that is really the line you want to follow. Yes, I said that right. There are twenty different pedigree choices for Francis Tanner. These duplicates are in addition to all of the combined records for Francis Tanner in the program already. For example, here is a screen shot showing that Francis Tanner has 45 combined records: 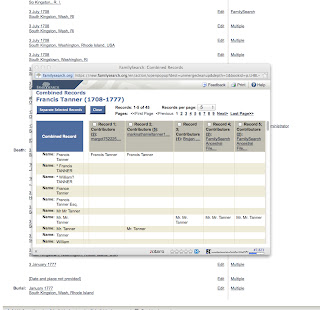 If there is no asterisk does that mean anything? Not really, there may still be a number of duplicates in the file that have yet to be identified. Just thought you would like to know.