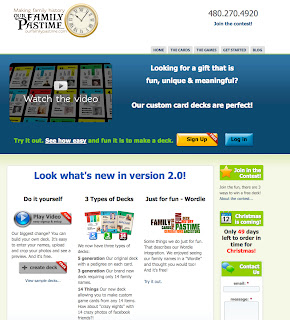 One of my friends developed a new concept in card games, overlaying the more traditional cards used for a variety of other card games, like Rook, with a genealogy theme. The company is called "Our Family Pastime." I am aware that there are other card games out there in the genealogy world, but this one make a personal statement, with pictures of your own family on the cards. Of course, there are games you can play using the genealogical information, but the cards also work in the more general context of card games. Quoting from the developer of the game concept, "The concept of turning family history "work" into family "fun" was good. The idea came because I so love my ancestors and their stories and it just broke my heart that many in my family just didn't see how exciting and fun it is to know about them. I knew if they learned about them then they would find out like I did.  So I figured out how to do what our family loves to do and inject something that might peak their interest."

Now, before we get into a long discussion about the relative merits of card games, I need you to know, I don't play games. Period. This all started back when my children started to become teenagers and turned out to be much smarter and much better game players than I am. I figured there was no reason to play a game when I would always lose. They really enjoy playing against each other because they are all competitive and smart. My grandchildren also play a lot of games and this looks like one they might not exactly like at first, but would warm up to. I appreciate anything that actively promotes genealogy, of course.

The developer went on to describe how the game works and some of the reactions he has had to the concept,


My daughter-in-law was putting together a deck for her mother's parent's ancestors.  She commented to me that she had heard these names her whole life but never really knew how they were connected.  She said "it really works!".

One of the surprising things I found was how amazed the family is at all the names they are related to.  Since I include the grandparents surname at the top of the card.  That is a fun discovery for them.

Our biggest improvement has been the ability to allow people to create their own cards, it allows us to charge much less than earlier.

We added a 3 generation deck since obtaining the 62 names needed for the 5 generation was tough for some.  The games are the same they just don't have the pedigree on each card.

In my family, we have created a sheet of cousin pictures. Our family is so wide spread across the U.S. that we seldom see each other. So the cousin pictures are used by the parents to help the younger members of the family have a sense of belonging. I guess I liked the idea of the cards because of that reason.
Posted by James Tanner at 3:36 PM