Using your smartphone to take pictures? 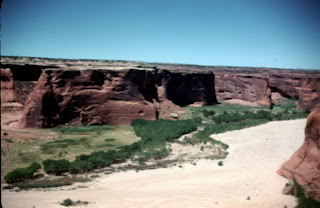 This is a really, really bad picture of Canyon de Chelly. For as long as I can remember there have been cameras and then there have been "cameras." What I mean by this is that during my lifetime there have always been very inexpensive (cheap) cameras and very expensive professional level cameras. The cheap camera sometimes took almost acceptable pictures as long as there was enough light and you really didn't want to see anything except a blob of people. I took the above picture when I was about twelve years old. If I had owned a decent camera, the picture might have at least been in focus. The other major problem with the picture is what is called vignetting, or a fall off in the the light around the edges and in the corners of the picture. This extreme example is caused by a poor quality lens.  Some of the other problems with the picture are my own fault, the picture is not straight and although the subject matter is spectacular, the composition and choice of subject are sadly lacking.

So there are really two important components to taking pictures, the equipment and the photographer's ability. Now, lets fast forward to today. Fifty-five years later, technology has changed considerably. I no longer use film in my camera. But could I take the same horrible picture today? Umm. Maybe I couldn't but that doesn't mean that the same problems don't exist, but just on a different scale. All the camera equipment in the world wouldn't make that picture of Canyon de Chelly any better but perhaps a little experience and knowledge about composition and subject matter might help.

Let's see if you think I have learned anything in all those years. You could go to my photo blog, Walking Arizona, but here is a picture I took not long ago of a different canyon, this time Bryce Canyon in Utah: 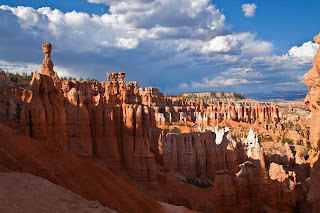 This reflective travel back into the past came about as a result of the release of the iPhone 4S. iPhones and smartphones in general have become the "Instamatic" of the modern age. The number of people carrying around cameras has never been greater. The new iPhone 4S has an 8 Megapixel built in camera. I ran across a side-by-side comparison between the new iPhone and a very expensive professional level Canon 5D Mark II. You might want to take a look at how the two cameras compare in quality. The Canon Camera and lens are more than 18 times as expensive as the iPhone 4S at $200.

By the way, the side-by-side pictures are really bad from a composition and photography standpoint. So are we now to the point where a cheap (relatively) camera is as good as the most expensive models? (The Canon 5D Mark II is not even close to being the most expensive camera, by the way). For one thing, having a cheap camera that takes good quality pictures will certainly help.

But what about genealogists, don't we need fancy equipment to do serious photography? That is a good question. As soon as I get my back ordered iPhone 4S I will do some comparison between the smartphone camera in my present iPhone 4, the new iPhone 4S, a point and shoot camera like the Canon PowerShot and my Canon 5D Mark II with an L-series lens. How do you think all this will come out? Will we all throw away our expensive cameras and use our smartphones?
Posted by James Tanner at 7:54 AM