Look in the Newspaper for help

Yesterday I spent an hour or so helping a patron at the Mesa Family History Center with a genealogy question about an ancestor who lived in Tennessee. He had contradictory information about the family and questioned the accuracy of some of the dates. Pretty typical situation for starts.

The first problem was that he was starting to investigate the remote ancestor without building a line of proof back. For example, starting with himself and his father, he was comfortable with the information he had in the file. But once we got to his grandfather, he was sure about the locations of the events like birth and marriage. I explained that most genealogical records are geographically based. That is, if you want to find a particular person, you have to know where to start looking for records.

The location of the first event we considered was in the town of Pulaski, Tennessee. The date was in the 1890s. The problem was immediately evident. He did not know anything about the town, the county or even the state of Tennessee. The person he was concerned about was his great-grandfather. My question was, how big is Pulaski? What county was it in and what records had he looked at about his grandfather's birth? I mentioned my first rule of genealogy, if you have a birth date and a birth place, the one thing you can be sure of is that the child's mother was there at that time and place. Obviously, the father could have been somewhere else, but the mother was there.

OK, so if you were sitting there helping this man find his great-grandfather in Pulaski, Tennessee where would you go for information? The immediate knee-jerk answer is the U.S. Census for 1900 (the 1890 U.S. Census was burned). Yes, but he is interested in the birth date and the marriage information of the parents for a child born in the 1890s. Why start with the Census? When you are looking for specific information you need to focus on the place at the time.

I began by looking from Pulaski, Tennessee in a Google search for a Wikipedia article on the town. From Wikipedia I learned the following:


Pulaski is a city in Giles County, Tennessee, United States. The population was 7,870 at the 2010 census. It is the county seat of Giles County. It was named to honor the Polish-born American Revolutionary War hero Kazimierz Pułaski. Pulaski is most well known for being the birthplace of the Ku Klux Klan. Wikipedia:Pulaski, Tennessee

Pulaski is indeed a small town. I suggested we look for a newspaper account of the grandfather's birth or maybe the marriage of his parents. I suggested several places to look and showed him the Chronicling America, Historic American Newspapers at the Library of Congress. Incidentally, I also showed him how to determine the county boundaries history from the Newberry Atlas of Historical County Boundaries project.

So far, some of what we were reviewing confirmed what information he already had, but the fact was that he didn't know anything at all about the town or its history or the jurisdictions where records might be available. I was not doing his research for him, but trying to give him some ideas of places to start finding out what records might be available. Why go to the newspapers? The answer is in two words, small town. In earlier times, nearly everything that happened in a small town was reported in a newspaper. Usually with more detail than the people who lived there wanted the rest of the community to know.

Presently, the Library of Congress has 4,540,417 pages of historic newspapers digitized online and searchable by any search words, such as the name of the person. He found over 1000 references to his great-grandfather's name. Of course, he needed further filter that search by location. But then I suggested that he look for the names of the newspapers in Giles County. The Library of Congress has a U.S. Newspapers Directory, 1690-Present, that will give the location of any newspaper in the directory and indicate where the copies can be found by year. You can search by county in the U.S.

Guess what? Pulaski, Giles, Tennessee has had, over the years, 21 different newspapers. Here is a screen shot of the list: 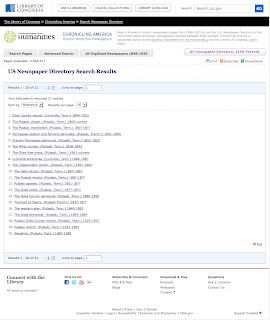 He only needs to check the dates and availability of the newspapers for about the time the ancestors lived in Giles county.

Did I answer the question? No, I did not find a date but my purpose was to show him how to find his own information and where to look. The summary is always investigate the place and verify the exact location and jurisdiction in the time period of the last definitely known information before you start searching Census records or whatever and always check the newspaper for more information. Oh, I told him several other places to look for newspapers but the Library of Congress site usually has information about the specific years and availability of the papers.