More on the Ethics and Historicity of Photo Restoration 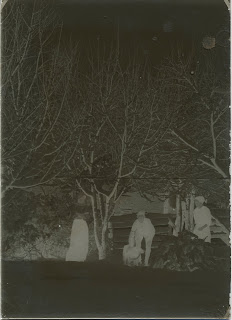 What would you think would be the allowable extent to which this scanned negative could be manipulated digitally? Here is my suggestion: 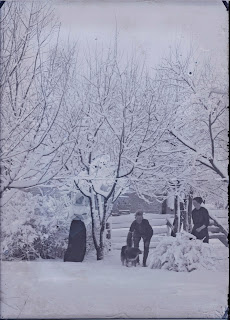 The original scan was saved as an Adobe Digital Negative (no relation to the fact that it is a scan of a negative) or .dng. To "develop" the negative, I used Photoshop to "invert" the negative image. I also lightened the image and increased the contrast. All of these actions could be considered to be within the parameters of what was traditionally done in the dark room. What if I altered the photo to take out the woman standing on the right side? Would that be acceptable? What if this photo, rather than being a rare glass negative from the early 1900s was a digital image to begin with? If you look closely at the image, you can see several scratches and some dark black dots. These defects may have arisen in the storage of the negative or they may have been there from the time the photo was taken. What if I cleaned it up a bit and took out the scratches?

All of this might be considered "acceptable" depending on how severe the changes were to the original. But in this case, the original is not much help in determining what the photographer had in mind. What makes me shudder is the trend in scrapbooking where the photos are cut to odd shapes with fancy cut borders. I always hope the family has another copy of the picture.

I think that when you scan genealogically important photos, you should use the best technology available and make as few changes or edits to the originals as can be possible. If you are going to edit a photo, do not make the edits on an original scanned image, but on the copy of the original. If you feel it necessary to make editorial changes to a photo due to damage or loss of detail, I suggest making those as conservatively as possible.

I realize that almost every statement I make can be debated by someone with a differing opinion. But what I do not care to see is people who think they better about what should be in the picture.

If you want to make your own photos look old by adding sepia tones, or funny by adding special effects. Go ahead. Just remember that your descendants might like to see some nice conservative images of your family some day and might not appreciate special effects.
Posted by James Tanner at 4:55 PM