Somewhat Random Thoughts on Photography and Genealogy - Truths and Lies

A number of the comments made in response to my sort-of recent post on the Ethics and Historicity of Photo "Restoration" started me thinking about photography and genealogy in general. There is a saying that the camera never lies. Some pundits have added the comment to read, photographs never lie until you edit them. As genealogists are we seeking Truth (with a capital T) or is genealogy an art where we express our subjective thoughts and impose them on history?

Is truth objective or subjective? Or both? What role do photographs have in understanding the truth of genealogy? Does it make a difference to my perception of historical truth if I can see photograph or a moving picture? If I know that my great-grandfather's name was Henry Martin Tanner, what does it add to see a picture? 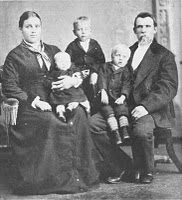 This is Henry and his wife Eliza and three of his seventeen children. What do you know about Henry Tanner that you didn't know before looking at the picture? The picture, for all it is worth, is no substitute for the story, in words, of Henry's life. If you were doing genealogy and like the fairy tales, only had one wish, would you wish for a narrative biography or a photo? What if I had told you that the photo was of John Brown of Albuquerque, New Mexico? Would your perception of the photo change? What if I told you that the photo was of an unidentified family? What is the value of unidentified photos? What kind of effort would you make to identify a photo? Would it matter if you found the photo in your grandmother's diary as opposed to finding the photo in second-hand store? By the way, the photo really is Henry Martin Tanner and his wife Eliza Ellen Parkinson. But a photo will always be ancillary to sourced information about a family or individual.

Why am I asking these questions? Hmm. The answer is pretty simple. We are so saturated with images of every kind, we take images for granted. Right where I am sitting writing, I can see dozens, perhaps hundreds of images. But this was not always true. As you can see from the photo of Henry and Eliza and children, this photo was not a casual, spur of the moment thing. It took time, preparation and effort and as a result, the photographer captured something of the soul of the family. There truly is something so unique about the photo that the trite saying, mere words cannot express, is literally true.

OK, let's get serious. Photography is a art with a large measure of technology and science. I may worry a lot about whether or not a photograph is good or bad, but when it comes to photos of my now long dead ancestors, the quality of the photograph is more of a bonus than a requirement. No matter how poorly taken, if the photograph of my great-grandmother is the only one I have, I will treasure it. But to what extent is photography merely an adjunct to genealogy?

I think photography is valuable in itself as an art form and way to translate reality. It is really not much different that any other medium of expression, such as words or sculpture. But as genealogists and historians we view photos as something entirely different, they are not so much art but a confirmation of reality. No matter how much you have written about an individual or family, if you find a photograph, the person instantly becomes more tangible and the history comes alive.