Since I checked earlier in the day, a new edition of Using the FamilySearch Family Tree: A Reference Guide (31 October 2012) went online. It is available under the Help menu link on FamilySearch.org. It is only visible if you are registered and sign into the website. Thanks for heads up from my loyal readers. 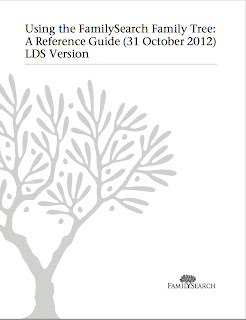 It might be helpful to have some idea of the changes in the new manual and subsequently, the changes to the Family Tree program, but we are left to try and glean out the changes from the text that differs from previous editions and versions. One place to look for differences is the Feature Comparison between Family Tree and new.FamilySearch.org in Appendix F near the end of the manual.

A careful reading of the Feature Comparison shows the following:

Hmm, looks suspiciously like they are going backwards for a while, some of the features I have been using for the past few weeks have now been retracted. Is this a treat or a trick?