One of the things that annoy me considerably is shoddy, poorly done genealogy work. During my youth, I often heard the statement quoted from my Grandfather, that anything worth doing was worth doing right. When I was a younger teenager, I learned the lesson from that quote in an interesting way.

We spent our summers in a small town in Eastern Arizona in the house my Grandfather had built beginning in about 1920. At the side of the house there was a old clothes line. The posts for the clothes line were two large juniper (cedar) logs set into the ground. Now a clothes line is not a major structure and because of some plumbing changes to the house, the poles needed to be removed.

My father and my uncle began the process of removing one of the cedar posts from the ground. After digging out a considerable amount of dirt, they tried rocking the post back and forth without any perceptible movement in the post. After digging a while longer, they kept trying to move the post without any effect at all on the post. All this time, I was an interested bystander.

Finally, my Uncle decided to go get his tractor and pull the post out of the ground. Soon he had his big John Deere tractor with a large drag chain attached to the post. He revved up the engine and began pulling on the cedar post. Immediately, the front wheels of the tractor were jerked into the air and the huge back wheels started spinning in the dirt. That post would not budge. My Grandfather acted consistently with his saying. He put that post into the ground to last. My Uncle and my Father finally had to dig all the way down about six feet to get that post out of the ground.

Doing it right meant doing it so it would last and never cause a problem in the future.

Now, to genealogy. It seems like there is very little "doing it right" going around. I see names in all caps, names in all lower case, initials rather than names, place names with commas for counties, names mistyped (not misspelled), dates recoded in a haphazard fashion and a multitude of other issues that show sloppiness and lack of diligence in doing the job right the first time.

For example, when I go through my ancestors on FamilySearch Family Tree, I can see up to fifty variations of the individual's name. Some with just the last name and Mister in front of it and some with only the last name. So when you get to the end of a line do you just stick in one or two more generations with the names Mr. and Mrs. instead of doing the research?

Here is an example of the variations; 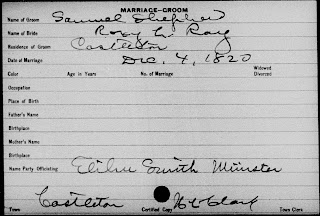 Some of these variations were entered just this year!

You can always excuse errors if you try hard enough, but then someone has to make the correction.