The Elements of Research -- Part Ten: When is Research really Research?

Doesn't my attitude about genealogical research invite chaos? I am guessing that your answer to that question revolves around your own attitude towards the subject. It is time to go back and summarize some of the main points of this series of posts.

As genealogists, in contrast to other disciplines interested in discovery, we deal with historical document or records. The corpus of these documents (or records) is finite. Except through fraud and forgery, no new historical documents are being created. Our own personal journey to enlightened genealogy consists of learning where these records are kept and how to access them. My definition of records and documents is very inclusive. Anything, audio, written, photographic etc. containing information is a document or record. A document or record becomes a "source" when it is incorporated into your personal collection of information and the location of the record or document is also recorded.

Here is an example so far going back to Mr. Researcher, in my ongoing hypothetical situation. Mr. Researcher goes online and accesses one of the many online databases containing copies of the U.S. Federal Census records. Using their search engine, he finds his ancestor in the 1910 U.S. Census. Here is an example of the blank form. 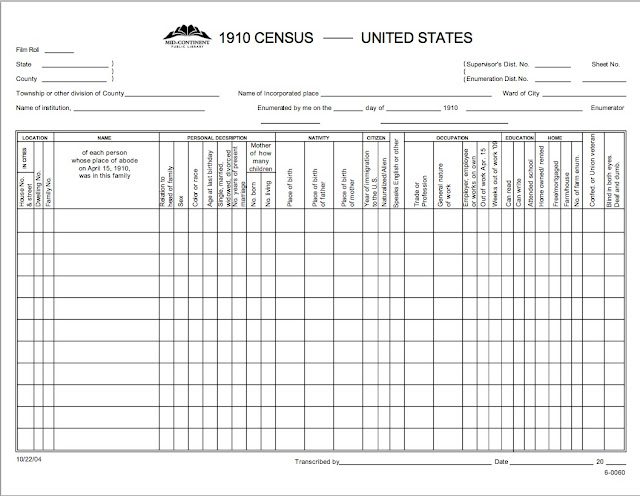 
How did he know to look in the U.S. Federal Census records? That is the million dollar question. Answering that question involves the entire concept of doing genealogical research. Our main activity as genealogists is not finding names, our main activity is finding the records that contain information about our ancestors. To move from having a question to finding a record or document that contains information about the answer to your question is what genealogical research is all about. When an experienced genealogical researcher answers a question posed to them by opening up an online database or going to a book or other record, it may seem like magic. In reality, it is experience.

What about all of the extensive and elaborate accruements associated with the concept of research? Where does the "Research Cycle" with all of its sub-steps and forms and gobbledygook come into the picture? Ah, now we come to the heart of the matter. Here is what has happened over and over again in all kinds of human activities.

My example goes back to the 1700s. My major area of graduate study was in Linguistics, but I also had a minor in the History of the English Language. Here is a link to an adequate review of the history of English.

In short, until the end of the 1700s there was no standardization of the orthography (i.e. conventional spelling) of the English language. In the United States, we get well into the 1800s before there was any consistent standardization for the spelling of surnames. Now, when the last time you took a spelling test? Currently, I am working on a computer while writing and a program is constantly telling me if I have spelled a word correctly. Guess what? I use a lot of words that are not in its vast dictionary.

All that stuff you hear about genealogical research is like the process we have gone through in English to have consistent spelling. We call those people who like to fault us for using there and their incorrectly, prescriptivists, people who want you to spell a word a certain way or use a word in a certain way. Some countries have national institutes or academies to enforce the "purity" of their language. Genealogists have their own prescriptivists, those people who want you to do research in their way and prescribe the exact method they would like you to record your findings, i.e. the correct citation method. If you can follow all of their rules, you are "admitted into the inner circle" of the genealogical community.

What happens to those who do not care to follow the prescriptivist routine?


I doubt that many genealogists who ignore proper citation standards will get eaten by lions, but they will certainly not get their work published in any of the "acceptable" journals.

But remember what I said above, research involves answering questions, but a source is only a source when the place where the information was obtained is recorded with the information.

So, where are we with the elements of research? This is turning into a long series. But guess what? I still have a lot more to say on the subject. Stay tuned. Remember Mr. Researcher and the U.S. Federal Census reference to his ancestors being from Germany? That should give any genealogist a lot to think about.