The Elements of Research -- Part Twenty-four: More about Daniel Boone

The family tradition and the extended line for the Morgan family I discussed in the last installment, would lead you to believe that my Morgan ancestors were related to Daniel Boone's mother, Sarah Morgan Boone. As I have already shown, this is highly unlikely since the there are inconsistencies and inaccuracies in the data many generations and many states away from the Boone family. The examination of the recorded, individual events in the last blog post illustrates the basic concept of research; that is, the direct relationship between searching historical records for information concerning individual ancestors and their families and the accuracy of the information recorded.

This post and the one following will summarize and conclude this rather lengthy series, but these posts will by no means conclude all that I have to say on the subject of research. Genealogy is entirely a research oriented activity and it is tragic how few of the adherents spend the time and energy necessary to adequately explore and document their ancestry. The issues I pointed out in the previous post may seem trivial, but they illustrate real issues of accuracy and consistency that question the entire structure of conclusions made about this particular family by genealogists stretching back over 150 years.

In that relatively short time, the accuracy of the information about Garrard Morgan is called into question. By the way, as far as I can determine, the addition of the middle name "Hamilton" to my Great-grandfather, John Morgan, was done by the genealogists after his death, he did not use that name during his lifetime. Likewise, the designation "III" of Garrard Morgan is also a genealogical addition.

The goal of genealogical research is demonstrating valid conclusions supported by the examination of historical records and documents. The individual researcher must come to his or her own conclusions. The source of the information that influenced the formation of those conclusions must be recorded or the conclusions must be considered tentative and unreliable. Notwithstanding the need to derive valid conclusions, to some degree, all genealogical conclusions are basically incomplete and tentative because the discovery of additional historical records or documents may change those conclusions at any time. Each step or generation backward into the past must be supported by some validly derived conclusion (no matter how it is designated) in order to justify adding another generation. If the motivation of the researcher is other than deriving supported conclusions (i.e. trying to connect to royalty or whatever) then every conclusion is suspect.

Two major distractions in the present genealogical research community consist of ignoring the tentative nature of all historical research and constantly focusing on the formal presentation of the conclusions. I certainly agree with the need to carefully document each conclusion. It also helps, in some limited cases, to explain your conclusions, but, as I have previously stated, using the Chicago Manual of Style does not necessarily validate your conclusions.

Back to my illustration. For reference, here is the screenshot of the existing record for Garrard Morgan, III on the FamilySearch.org Family Tree: 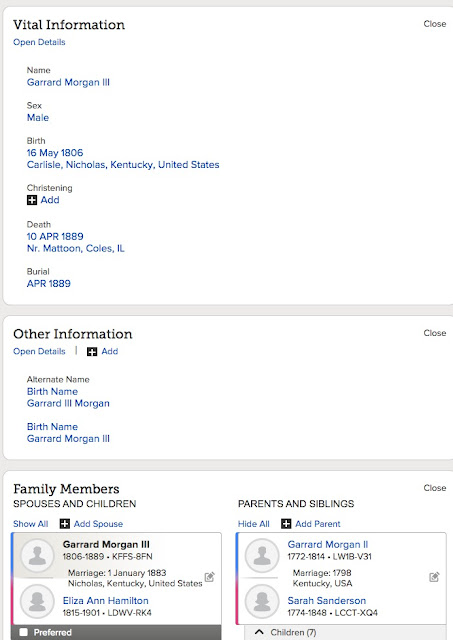 Here is a list of the present sources for Garrard Morgan, III: 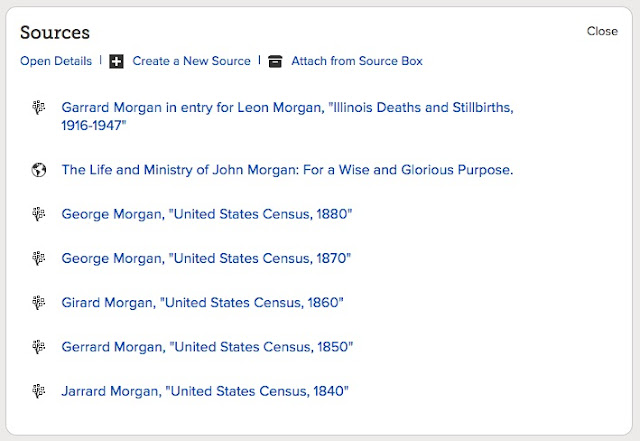 The information about Garrard Morgan, III is very limited in the John Morgan book. To me, the recorded research is very superficial, especially for a person who lived his entire life in the 19th Century. Of course, there may be many researchers out there that have extensive information about this individual, but how do I go about finding them? The whole point of the FamilySearch.org Family Tree is to create a unified family tree, one place where all of the information known about individuals and their families can be gathered and compared. If there are knowledgeable researchers with additional information who are failing to consider putting their information in the Family Tree, for whatever reason, they are impeding the research process and not helping to correct published information.

The first listed source is a death record for Leon Morgan, who died when he was 76 years old in Chicago, Cook, Illinois. His birth date is listed as 28 April 1847 in Greensburg, Indiana. His parents are listed as Garrard Morgan and Eliza Hamilton. What is in the Family Tree presently? Here is the entry for Leonidas McConnell Morgan: 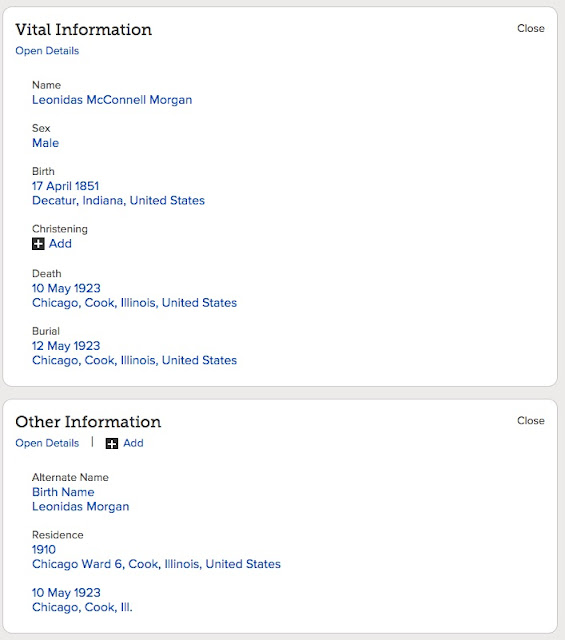 Now, without spending more than a few minutes, I find a discrepancy between the birth date and place recorded in the death record and the date in the Family Tree. Now we go on to the sources recorded for Leonidas McConnell Morgan: 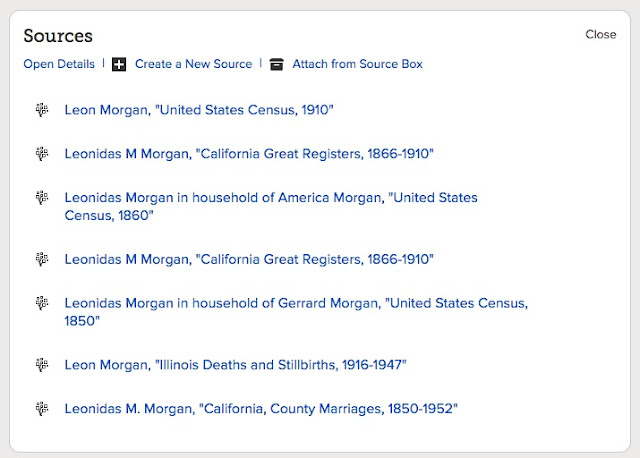 As you can guess at this point, this whole process is ongoing and endless. The compilers and writers of the John Morgan book incorrectly assumed that everything was "settled" and presented his descendants with a beautiful, hard-bound book full of wonderful stories. Unfortunately, they failed to adequately document his ancestry. It is interesting to point out that John Morgan is listed in the 1850 U.S. Federal Census as "John W." In examining the sources recorded for Leonidas, I find even more discrepancies and inconsistencies. This is certainly a fertile field for accurate research.

Other than illustrating the sorry state of the research on this particular family, what is the point? The answer to this question is contained in the 23 previous posts I have written on this subject. Stay tuned for further conclusions.


Previous installments of this series include: