The Elements of Research -- Part Thirteen: Proof or Conclusion?

Proof is a slippery concept. Unfortunately, there are a number of very distinct disciplines that utilize the term "proof" in dissimilar ways. Genealogical inquiry, a close relative of historical research, employs the words "evidence" and "proof" in a variety of ways. I have previously written extensively about the difference between the use of the two terms in a legal and/or scientific context and the actuality using the terms in genealogical research. My conclusion is that, for the most part, they are inappropriately used.

Let's start at the beginning (or as close to the beginning as we can get). By definition, "proof" is the evidence or an argument that establishes or helps to establish a fact or the truth of a statement. Epistemology is that branch of philosophy that investigates the origin, nature, methods and limits of human knowledge. See Dictionary.com. Before we go further, we need to consider, that at least from a narrow mathematical viewpoint these concepts are limited by Gödel's incompleteness theorems. One statement of explanation is as follows:


The first incompleteness theorem states that no consistent system of axioms whose theorems can be listed by an "effective procedure" (e.g., a computer program, but it could be any sort of algorithm) is capable of proving all truths about the relations of the natural numbers (arithmetic). For any such system, there will always be statements about the natural numbers that are true, but that are unprovable within the system. The second incompleteness theorem, an extension of the first, shows that such a system cannot demonstrate its own consistency.

The implications of Gödel's theorems extend far beyond the realm of theoretical mathematics. I am not implying or arguing that the Incompleteness Theorems apply to genealogical research. What I am saying this that, at least in a specialized area of mathematics, there is a commonly accepted principle or theorem that imposes limits on the ability of certain types of statements to be proved. For the classic, popular work on this subject see one of my all-time favorite books,

In law, you "prove your case" when you come up with an argument that convinces a judge and/or a jury that your client should prevail in some type of litigation. Genealogists are not proving the information contained in their research. There are no genealogical judges and juries.

What then is all this genealogical research about? The key concept here is the statement above, "an argument that establishes or helps to establish a fact or the truth of a statement." Does genealogical research lead one to the TRUTH? I would like to examine that question more completely and offer an answer. Genealogy is not involved with concepts about absolute TRUTH at all. In many cases (probably the vast majority) we rely on historical records maintained by human record keepers. Human record keepers are notoriously unreliable. For example, I recently mentioned a situation where I found that two sisters had both lied about their age at time of their marriages. Both said they were ten years younger than they actually were. Of course, I was also assuming that the birth records I found were accurate. What is really the case was that I drew a personal conclusion that the birth records were more accurate than the statements made by the two sisters and recorded at the time of their marriages. What was the truth of the situation? Perhaps there are additional documents or records out there that will sway my opinion one way or another. Has the present state of my research proved the two ancestors' birth dates? As is the case in many situations based on the discovery of historical records, our degree of accuracy is limited by the availability of records or documents. In fact, the determination of the TRUTH will always be illusive and evanescent.

There is no reasonable definition of the terms "proof" and "absolute truth" that can be argued to apply to genealogical research. Here is what we do as genealogists.

Adding a patina of terminology to the genealogical research process does not add any more certainty or proof. We can make all the claims we want, but our claims are nothing more or less than our personal opinions bolstered by arguments.

Let's suppose (in a hypothetical situation) I discover the following document: 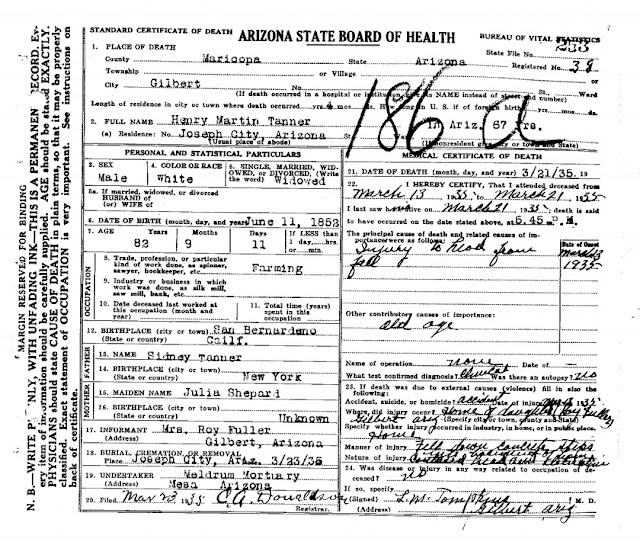 In the current state of affairs as they exist in the genealogical community and using the currently popular jargon, this document would be considered a "primary source" for the date of death and the cause of death of the decedent." It would be a secondary source for all of the remaining information. If discovering the decedent's date of death were an issue or a research objective, then the document would also be considered "direct evidence." I could then dutifully copy the information from this document and include it in whatever form of my own that I happened to use at the time. If I were questioned about the decedent's date of death,  I could say "I have proof that he died on 21 March 1935." When did Henry Martin Tanner really die? If you believe that this question is entirely unnecessary, then you have missed the point of my entire discussion concerning research.

Now, let's look at what this document says, exactly, not simply by copying out dates and other information. Here is what it says:

When did he die? Was the doctor who signed this death certificate present when Henry Martin Tanner died? Think about this for a minute. Is this a primary source for the date of death? Was the doctor there when he died? The answer is we do not know and further, we actually do not know the date of his death. All we know is that the doctor last saw him alive on 21 March 1935 and was told that he died on that day. What is the indistinct word written in by the doctor over the statement "I last saw him alive?"

Let's speculate. What if Henry had a life insurance policy that elapsed at midnight on the 21st of March 1935 (I am using this as pure speculation, not supported by reality). What if by dying on the 22nd he would not be covered by insurance. Would there be a reason why this particular date then became unreliable. Did the doctor lie about the date of his death? Who told him the time of death? When did the doctor sign the death certificate?

Are all my questions silly in the extreme? Who would take me seriously? No, my point is this: Historical records cannot be used to prove the truth. They are what they are and any conclusions you draw from your research are just that, your own conclusions based on your evaluation of the information you have found.

Research is the process of asking questions and then discovering documents and records that provide information to answer those questions. In doing this genealogical research, if I fail to note where I obtained the information, there is no way that subsequent researchers can determine the validity of my conclusions.

Now we get to the next level of inquiry about the elements of research. What about the "scientific" findings of DNA testing? If I take a DNA test doesn't that prove a relationship? Aren't we rapidly moving into establishing our ancestors by scientific methods that give us positive evidence and proves our relationships beyond a reasonable doubt? What place does traditional book and paper research have in our glorious future of scientific DNA testing? Let me ask one more question. Would all the DNA testing in the world help me determine the actual date of death of Henry Martin Tanner?

Do you really think I will answer those questions? Stay tuned.